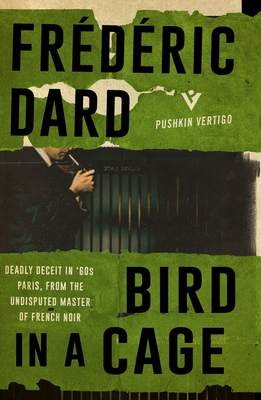 Bird in a Cage (Paperback)

30-year-old Albert returns to Paris after six years away, during which time his mother has passed away, to find himself entangled in a complicated case centred around a woman he met at a restaurant whose husband's body appears in her lounge, but then disappears almost inexplicably.

Frédéric Dard (1921-2000) was one of the best known and loved French crime writers of the twentieth century. Enormously prolific, he wrote more than three hundred thrillers, suspense stories, plays and screenplays, under a variety of noms de plume, throughout his long and illustrious career, which also saw him win the 1957 Grand prix de littérature policière for The Executioner Cries, available from Pushkin Vertigo in Fall 2016.

David Bellos is an English translator and biographer who currently teaches French and Comparative literature at Princeton University. His translations include several of Georges Simenon's Maigret novels, as well as Paul Fournel's Dear Reader, published by Pushkin Press. He has also written biographies of Perec, Jacques Tati and Romain Gary and an introduction to translation, Is That a Fish in Your Ear? Translation and the Meaning of Everything.

Praise For Bird in a Cage…

"A tense and yearning tale set in a Paris suburb during the 1960s. . . . In “Bird in a Cage” , nobody is quite as they seem to be . . . Dard is a consummate hoodwinker: As you read along, there are apparent incongruities of plot and characterization. But like the waiter who magically whips the tablecloth from beneath a heavily laden table without disturbing any cutlery, all things are left
accounted for." -- The Wall Street Journal

"With their tight plots, the stories are particularly cinematic, and film-makers are already showing interest. Dard also wrote screenplays and plays. Their revival could be just around the corner." — The Observer

"Melancholy and atmospheric, with a twist worthy of Agatha Christie at her devious best, this brief tale has the hallmark of classic French noir" – The Guardian

"No question: for me, he was the greatest." - Philippe Geluck

"Alongside the Maigret novels of Georges Simenon there is a rich vein of period French crime still to be tapped. Frédéric Dard is a case in point." -- Daily Mail

"This short, sly novel of the night has more than enough sibstance and mystery to keep readers awake and engrossed." -- The National
or
Not Currently Available for Direct Purchase
Copyright © 2020 American Booksellers Association