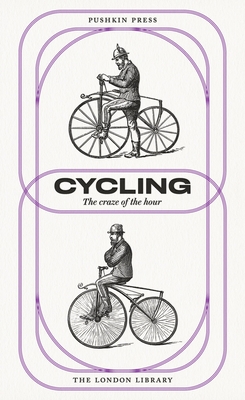 The Craze of the Hour (The London Library #1)

The first bicycle was invented at the beginning of the nineteenth century, but it wasn't until the 1890s that the craze really took off. This brought with it the fears, scaremongering, worries and uncertainties that inevitably accompany any new fashion. Women (often unchaperoned and oddly dressed) taking to "velocipedes"; overexertion; the possibility of heart disease - these are just some of the fears that haunted the establishment in the late nineteenth century... But with it, of course, came the joy and wonder of "the easy and agreeable motion" of this thoroughly modern means of locomotion.

The books in "Found on the Shelves" have been chosen to give a fascinating insight into the treasures that can be found while browsing in The London Library. Now celebrating its 175th anniversary, with over seventeen miles of shelving and more than a million books, The London Library has become an unrivalled archive of the modes, manners and thoughts of each generation which has helped to form it.

From essays on dieting in the 1860s to instructions for gentlewomen on trout-fishing, from advice on the ill health caused by the "modern" craze of bicycling to travelogues from Norway, they are as readable and relevant today as they were more than a century ago - even if the cardiovascular dangers of cycling have now been disproved!

Charles Spencer owned a shop on Old Street selling equipment for the building of gymnasia. He devoted most of his writing to the subject of cycling, and was heavily involved in the Middlesex Bicycle Club. On 17th February 1869 he rode his bicycle from Trafalgar Square in London to Brighton in just fifteen hours.

George Herschell was a specialist in diseases of the digestive organs, and led a successful life both as a practising doctor and as the writer of medical papers. In his spare time he enjoyed golf and photography. He died in 1914.

Barry Pain is best remembered for his "Eliza" stories; he was known during his lifetime as a writer of parody and lightly humorous stories. He was an eccentric man, with such varied interests as Georgian literature, the occult and precious stones.

As well as writing this short story, Jerome K. Jerome author also wrote Three Men on the Bummel, an unsuccessful sequel to Three Men in a Boat, in which the same characters, minus the dog, go on a cycling tour through the Black Forest. He died in 1927.

Praise For Cycling: The Craze of the Hour (The London Library #1)…

"Forget the Christmas crackers – give everyone one of these beauties." — Ian Sansom, The Guardian