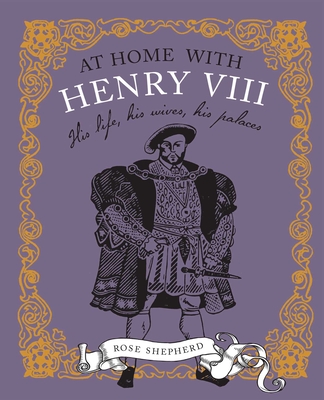 At Home with Henry VIII

His life, his palaces, his wives

Delve behind the facade to take an intimate peek at the life and times of this famous Tudor king.

Henry VIII is one of the most recognizable of English monarchs, famous for his great weight, and his six wives. But what was it really like to be Henry VIII, or to be married to him? How did he live, and where? Who were his servants and what did they do? What clothes did he and his wives wear, how did they entertain themselves, and who did they choose to spend time with?

Behind the well-known image of Henry in his later years lies a fascinating story of a man driven by private passions—the desire for a legitimate son and heir, a compulsion to collect wealth and to spend it—and by the need to control the constant power struggles among his courtiers. Rose Shepherd reveals the day to day life of Henry VIII and his wives: from the young Henry, married to Katharine of Aragon, enjoying hunting, dancing, and music; his marriage to the original power-dresser, Anne Boleyn; happiness at Hampton Court with Jane Seymour; a brief time with Anne of Cleves, so crucially misrepresented by the portrait artist chosen to depict her; and the courtly intrigues and loose morality revealed in his marriage to Kathryn Howard; to his later years of increasingly ill health with Katherine Parr.

Rose Shepherd is the author of Sherlock Holmes' London and At Home with Henry VIII for CICO Books, as well as books on London's most amazing places, and Britain’s royal places and stately homes. Rose is based in Ramsgate, Kent, UK.
Loading...
or
Not Currently Available for Direct Purchase