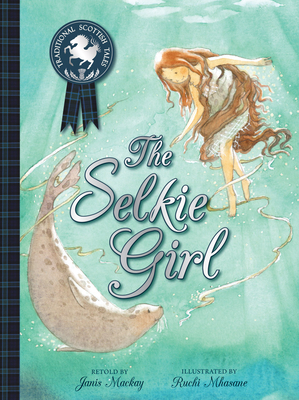 Fergus lives with his father by the sea, but is lonely. He wants a friend more than anything.

One day Fergus finds treasure on the beach: a beautiful fur blanket hidden in the rocks. But Fergus doesn't know that his treasure belongs to someone else -- a selkie girl has lost her seal skin and can't go home to the sea without it.

Will Fergus give his new friend what she needs, and risk being lonely again?

This is a lovely retelling of the traditional Scottish folk tale of the selkie (a seal who can become human) adapted for a young audience. Beautifully written by storyteller and selkie storyteller Janis Mackay, the tale is accompanied by stunning illustrations by Ruchi Mhasane.

The Selkie Girl is one of the first titles released in the Picture Kelpies: Traditional Scottish Tales range of picture books that bring classic Scottish folk and fairy tales to life for young children.

Janis Mackay currently lives in Edinburgh, where she teaches creative writing and works as a writer and storyteller. She is the author of several novels for older children including the Magnus Fin trilogy, and The Accidental Time Traveller, winner of a Scottish Children's Book Award. Ruchi Mhasane has a masters degree in children's book illustration from Cambridge School of Art. She currently lives in India, where she grew up.
Loading...
or support indie stores by buying on