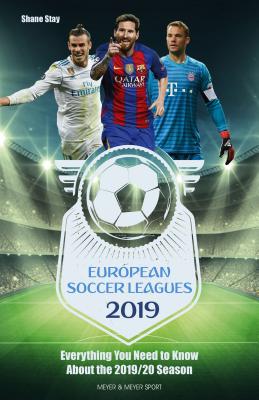 Everything You Need to Know about the 2019/20 Season

European Soccer Leagues 2019: Everything You Need to Know About the 2019/20 Season gives every fan an all-access look into Europe's storied club teams, including the players, coaches, each team's style of play, their future direction, along with background on key stadiums and cities.

For over a hundred years, the EPL, Serie A, La Liga, and Bundesliga have been the leaders in world club soccer, along with many other quality leagues, from Holland, France, Portugal, Switzerland, and Denmark. The European leagues have historically featured the world's best, going all the way back to George Best, Franz Beckenbauer, Johan Cruyff, Michel Platini, Bryan Robson, Diego Maradona, and into the modern era with a host of talent, including Roberto Baggio, Zinedine Zidane, David Beckham, Thierry Henry, Andres Iniesta, Wayne Rooney, Zlatan Ibrahimovic, Cristiano Ronaldo, Messi, and Neymar. All of these leagues, teams, and players are featured in this book.

For generations, fans have established their place behind their team, based on a passionate love affair with their chosen jersey and the long history that it stands for. This book takes the fan through every aspect of the upcoming European club season, featuring the million-dollar talent from Real Madrid to Manchester United and illuminating the very best of European soccer.

Shane Stay is the author of Major League Soccer 2019: Everything You Need to Know About the Teams, The World Cup 2018 Book: Everything You Need to Know About the Soccer World Cup, Why American Soccer Isn't There Yet, and The Cairo Project, whose stories have also appeared in various online and print publications in the genres of sport, humor, and modern culture. In the calendar year of 2008, he played professional soccer, co-authored a print book, published a magazine story, bottled Leaf Dressing, worked clubs as a comedian, was a restaurateur, and received a Master of Arts. In 1999, he founded the first online Current Events Game (CE Game). He has appeared on TV and featured on numerous radio broadcasts including ESPN and NPR. He lives in Chicago, Illinois.
Loading...
or
Not Currently Available for Direct Purchase