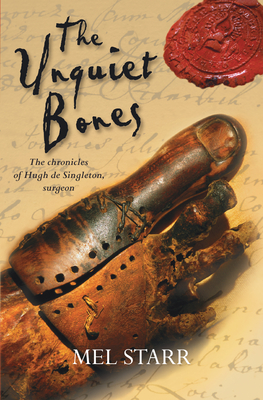 The Unquiet Bones (The Chronicles of Hugh de Singleton, Sur)

Hugh of Singleton, fourth son of a minor knight, has been educated as a clerk, usually a prelude to taking holy orders. However, feeling no certain calling despite a lively faith, he turns to the profession of surgeon, training in Paris and then hanging out his sign in Oxford. A local lord asks him to track the killer of a young woman whose bones have been found in the castle cess pit. She is identified as the impetuous missing daughter of a local blacksmith, and her young man, whom she had provoked very publicly, is in due course arrested and sentenced at the Oxford assizes. From there the tale unfolds, with graphic medical procedures, droll medieval wit, misdirection, ambition, romantic distractions and a consistent underlying Christian compassion.

Mel Starr was born and grew up in Kalamazoo, Michigan. After graduating with a MA in history from Western Michigan University in 1970, he taught history in Michigan public schools for thirty-nine years. Since retiring, he has focused on writing his successful Chronicles of Hugh de Singleton series. Mel and his wife, Susan, have two daughters and eight grandchildren.
Loading...
or support indie stores by buying on