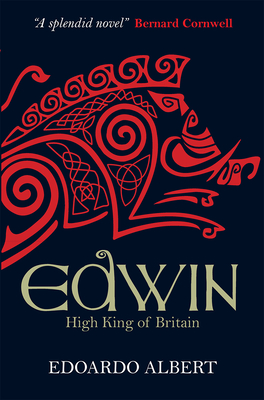 Edwin, the deposed king of Northumbria, seeks refuge at the court of King Raedwald of East Anglia. But Raedwald is urged to kill his guest by Aethelfrith, Edwin's usurper. As Edwin walks by the shore, alone and at bay, he is confronted by a mysterious figure - the missionary Paulinus - who prophesies that he will become High King of Britain. It is a turning point. Through battles and astute political alliances Edwin rises to great power, in the process marrying the Kentish princess Aethelburh. As part of the marriage contract the princess is allowed to retain her Christian faith. But, in these times, to be a king is not a recipe for a long life : This turbulent and tormented period in British history sees the conversion of the Anglo-Saxon settlers who have forced their way on to British shores over previous centuries, arriving first to pillage, then to farm and trade - and to come to terms with the world view of the Celtic tribes they have driven out.

Edoardo Albert is a copywriter, editor and writer of short stories, features and books. His stories have appeared in Daily Science Fiction and Ancient Paths, and he has written features for Time Out, TGO and History today. He was the editor of the Time Out Cycle London Guide. He is the author of Northumbria: a lost Kingdom (History Press), The Northumbrian Thrones series (Lion Fiction), and London: A Spiritual History (Lion Books).
Loading...
or
Not Currently Available for Direct Purchase