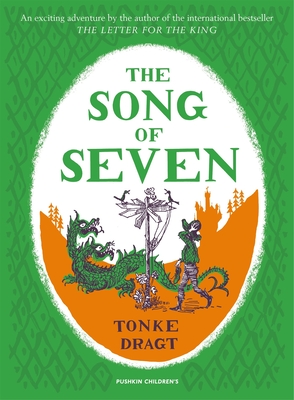 The Song of Seven

An exciting new stand-alone adventure by the internationally bestselling author of The Letter for the King.

Seven paths, seven unlikely friends, and one extraordinary adventure featuring magicians, secret passages, conspiracies, hidden treasures, a black cat with green eyes and a sealed parchment which predicts the future.
At the end of every schoolday, new teacher Mr Van der Steg entertains his pupils with tall tales of incredible events, which he claims really happened to him - involving hungry lions and haunted castles, shipwrecks and desert islands. One day, when he can't think of anything suitably exciting to tell them, he invents a story about a very important letter which he's expecting that evening, with news of a perilous mission. Evening arrives and so, to his surprise, does an enigmatic letter...
And so Mr Van der Steg is drawn into a real-life adventure, featuring a grumpy coachman, a sinister uncle, eccentric ancestors, a hidden treasure, an ancient prophecy and Geert-Jan, a young boy who is being kept prisoner in the mysterious House of Stairs.

Praise For The Song of Seven…

"Enchanting. . . Dragt’s tale is a curious, magical adventure that will appeal to those who love Tolkien and Lloyd Alexander." — Booklist (starred review)

"Dragt's twisty, light mystery tale has the charm of an old classic (which it is, having been published originally in Dutch in 1967). The pleasure in this whimsically Kafkaesque tale is in its unfolding. . . the slow reveals will keep the pages turning for fans of Elizabeth Enright and E. Nesbit." — Kirkus Reviews

"A cracking adventure... so nail-biting you'll need to wear protective gloves." -- The Times

"A wandering, winding ballad with occasional joyous percussion, to the spell of which the reader can’t help but succumb." – Guardian

"A magical, strange gripping tale about a teacher and his class who help a boy, kept virtual prisoner by his wicked uncle, to find treasure, friends and liberation." -- Spectator

Praise for The Letter for the King: A Sunday Times, Metro and Times Book of the Year; 'A true page-turner' Sunday Times; 'Thrilling' Daily Telegraph; 'A pulse-pounding epic' Metro; 'Spellbinding' Financial Times; 'A cracker' Spectator.

Praise for The Secrets of the Wild Wood: A Daily Telegraph and Sunday Times Book of the Year; 'Action-packed drama' Daily Mail; 'Thrilling' Metro; 'A spellbinding tale that will appeal to the young and old' The Lady

Tonke Dragt was born in 1930 in Indonesia. When she was twelve, she was imprisoned in a Japanese camp during the war, where she wrote her very first book using begged and borrowed paper. After the war, she and her family moved to the Netherlands, where she became an art teacher. In 1962 she published her most famous story, The Letter for the King, which won the Children's Book of the Year Award and has been translated into sixteen languages; its sequel, The Secrets of the Wild Wood, followed in 1965, and both are published by Pushkin Press. Dragt was awarded the State Prize for Youth Literature in 1976 and was knighted in 2001.
Loading...
or support indie stores by buying on