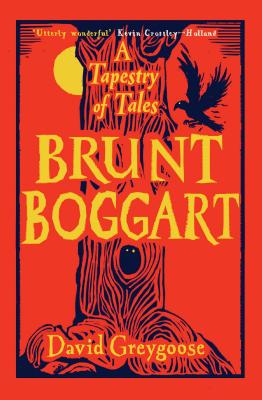 A Tapestry of Tales

This is a book like no other: a magical tapestry of folk tales, woven together to build a world that is as strange yet familiar as a half-remembered dream. It is an old world, a world of enchanted corn dollies and wild dances in poppy fields, a world of tricksters, lovers and fools.
Through this world, Greychild must journey in search of his mother: from the village of Brunt Boggart, down the treacherous Pedlar Man's track, all the way to distant Arleccra, a city of treasures and temptation. If you follow him, a part of you will never come back.

David Greygoose was born near Northampton and now lives on the edge of Liverpool. In 1976 he co-founded The Windows Project which runs writing workshops in schools and community venues. He has published three collections of poetry under the name Dave Ward, and his stories and poems have appeared in over 100 anthologies as well as being broadcast on TV and radio. Brunt Boggart is his first novel and was nominated for the CILIP Carnegie Medal.

Praise For Brunt Boggart: A Tapestry of Tales…

"Utterly wonderful... Now that I've stepped into Brunt Boggart, I know that part of me will never leave it." -- Kevin Crossley-Holland, author of The Arthur Trilogy

"David Greygoose conjures a rich, primordial dreamtime... A wonderful excavation of the story traditions that our ancestors huddled around for warmth, and highly recommended." -- Alan Moore, author of V for Vendetta and Watchmen

"Conjures a magical, poetic world of tricksters and enchantments in the mossy hollows of an ancient village." -- Observer

"It tastes fabulously medieval, it smells uncanny, it looks like the roots of half-forgotten herbs, and it sounds like verbs of thunder and earth." -- Jay Griffiths, author of Wild: An Elemental Journey

"[A] many faceted, finely crafted and genuinely enjoyable book... a piece of work that can be enjoyed equally by aficionados of fantasy, of folk horror and of fairy tale and folklore." -- Moof Magazine

"A marvellous collection of dream-like stories, all delightfully odd and many distinctly sinister... A book to be savoured." -- Nudge Books

"A strange and beautiful book." -- The School Librarian
or support indie stores by buying on
Copyright © 2020 American Booksellers Association