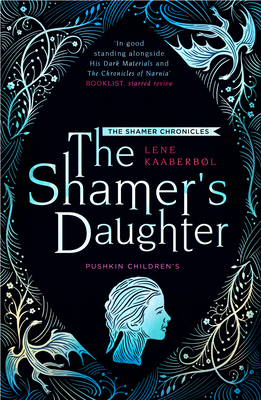 But when her mother is called to Dunark Castle to uncover the truth about a bloody triple murder, Dina must come to terms with her power - or let her mother fall prey to the vicious and revolting dragons of Dunark.

Praise For The Shamer’s Daughter: Book 1 (The Shamer Chronicles #1)…

"The series as a whole is in good standing alongside Philip Pullman's His Dark Materials trilogy and C. S. Lewis' The Chronicles of Narnia." — Booklist, starred review

"The term 'page-turner' is often used, but not always justified. It is deserved here, tenfold. I really, really couldn't put the book down." — School Librarian

"The most original new fiction of this kind ... thrilling and thoughtful." — The Times

"This novel stands on its own and offers a satisfying conclusion even as it provides an intriguing setting and mythology for future adventures." — Publishers Weekly

"An absorbing and fast-paced fantasy/mystery bursting with action and intrigue. The only question is: when will the next one come out?" — Bulletin of the Center for Children's Books

I gobbled it up!" - Tamora Pierce, author of The Song of the Lioness

An award-winning and highly acclaimed writer of fantasy, Lene Kaaberbøl was born in 1960, grew up in the Danish countryside and had her first book published at the age of 15. Since then she has written more than 30 books for children and young adults. Lene's huge international breakthrough came with The Shamer Chronicles, which is published in more than 25 countries selling over a million copies worldwide.
Loading...
or support indie stores by buying on