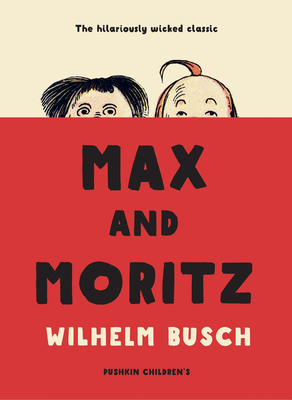 A lively NEW TRANSLATION of this anarchic children's classic alongside CLASSIC ORIGINAL ARTWORK.

A nostalgia pick, 19th-Century sensibility but THE foundational classic of German children's literature. As irreverant as The Cat in the Hat, though 92 years older, and dark!

Max and Moritz is perhaps the defining classic of German children's literature. In this darkly hilarious story, two young boys exercise their talent for ingenious mischief in a variety of dazzling tricks. Whether stealing a widow's chickens through her chimney or filling their teacher's pipe with gunpowder, Max and Moritz bring chaos and comedy wherever they go.

Containing all of the original illustrations, this new translation by Mark Ledsom brings the original's rhyming couplets to vibrant life and promises to delight a new generation of young readers.

Wilhelm Busch (1832-1908) was a German humorist, poet, illustrator and painter. He contributed satirical sketches to German weekly papers and wrote short verse narratives accompanied by illustrations, which are now considered to be forerunners of the comic strip. Max and Moritz, his most famous work, was published in 1865.

Praise For Max and Moritz…

"Mark Ledsom captures the gallop and verve of the original German while steering readers past a small number of semantic anachronisms… The pictures are terrific: sharp, witty, kinetic." — Wall Street Journal
or support indie stores by buying on
Copyright © 2020 American Booksellers Association