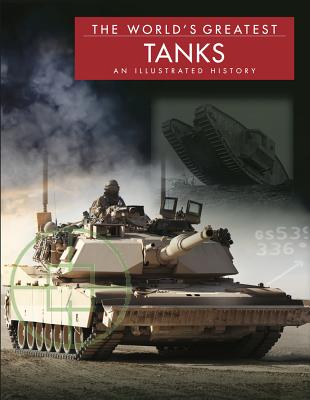 The World's Greatest Tanks features 52 of the best armoured fighting vehicles from World War I to the present day. Beginning with the prototype Mark V Male in 1917, the book ranges from World War I, World War II, through the Cold War and up to the highly sophisticated tanks that have seen recent service in wars in the Balkans, Caususus, and Middle East. From the Soviet T-34 and German Panther tanks of World War II to the M1A2 Abrams, Challenger 2 and T-90 of the present day, The World's Greatest Tanks is an expert examination of the most successful tanks of the past hundred years. Each entry is examined over two spreads and includes a brief description of the tank's development and history, a color profile artwork, photographs, key features and specifications tables. Packed with more than 200 artworks and photographs, The World's Greatest Tanks is a colourful guide for the military historian and military technology enthusiast.

Michael E. Haskew is the editor of WWII History Magazine and The World War II Desk Reference with the Eisenhower Center for American Studies. He is the author of "The Sniper At War," "The Encyclopedia of Elite Forces in World War II," "Order of Battle: Western Allied Forces of WWII," and "The Italian Campaign in World War II."
Loading...
or
Not Currently Available for Direct Purchase