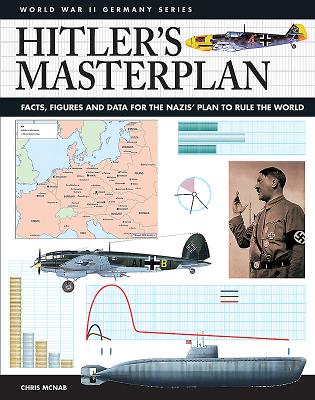 Facts, Figures and Data for the Nazi's Plan to Rule the World

What if Nazi Germany had been victorious in World War II? What would the world have looked like? Between 1933 and 1945, Hitler made many plans about transport, architecture, race, forced labor and Lebensraum, among many other topics. Some of these he implemented during his leadership, but what were the unrealized plans for a Europe defeated by The Third Reich? British men would have been exported to the East as forced labor, to join the slavs, while Nordic British women would have been used in Lebensborn stud farms with SS officers to repopulate the East with Aryans. Germany and Japan were to carve up the Soviet Union and Asia between them. Berlin was to be rebuilt as Germania, a world capital city designed on grandiose, neo-classical lines. Hitler's Masterplan reveals the true scale of Hitler's vision for a Greater Germany and a world dominated by Nazism. Arranged by topics such as Race, Architecture, Greater Germany, Empire, the book includes exhaustive reference tables, diagrams, colorful maps and charts, presenting all the core data in easy-to-follow formats. Hitler's Masterplan is an essential reference guide for anyone interested in the history of National Socialism.

Chris McNab is a wilderness expert, military specialist and author of over 20 survival publications, including How to Survive Anything, Anywhere, Living off the Land, and SAS Training Manual: Endurance Techniques. He holds a PhD from the University of Wales and lives in south Wales, UK.
Loading...
or
Not Currently Available for Direct Purchase