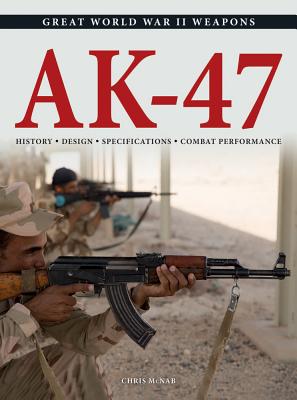 An authoritative work on one of the few weapons that genuinely changed the balance of power around the world: the AK-47. The AK-47 emerged from the mind of Mikhail Kalashnikov in the mid-1940s in an effort to combat German supremacy on the Eastern Front, and to create a rifle that could shoot a new type of bullet. Launched in 1947, it took only two years for the AK-47 to gain acceptance as the standard Soviet Army rifle. And it has featured in almost every conflict since the end of WWII, from the deserts of the Middle East and Africa, to the jungles of Vietnam and South America, to the icy landscapes of Afghanistan and northern Russia. AK-47 offers a complete, close up, and vividly illustrated account of this incredible weapon, and its history and development. It includes the techniques of maintaining and firing the rifle, and a country-by-country account of the variants and copies produced. Most importantly, the book assesses the impact of the AK-47 on the battlefield and evaluates its performance, ammunition, and tactical usage in actual combat. Includes annotated cutaway artworks, analysis of the gun's internal mechanism, and detailed specifications tables including all variants.

Chris McNab is a wilderness expert, military specialist, and author of more than 20 survival publications, including How to Survive Anything, Anywhere, Living off the Land, and SAS Training Manual: Endurance Techniques. He holds a PhD from the University of Wales and lives in South Wales, UK.
Loading...
or support indie stores by buying on