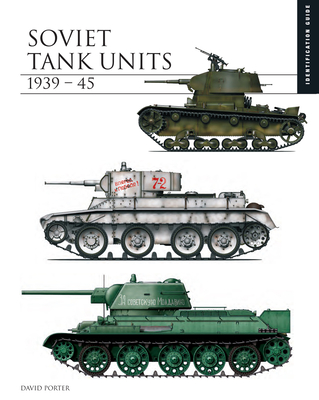 A highly illustrated and informative guide to the main armored fighting vehicles used by the Red Army during World War II. Packed with 250 full-color artworks and photographs with exhaustive specifications, this compact volume offers a comprehensive survey of Soviet-employed armored fighting vehicles by campaign, and covers the sample unit structures and orders of battle from company up to corps level. Organized chronologically, this essential guide begins even before the German invasion of 1941 and continues through the final defeat of Axis forces in May 1945, encompassing the defense of Moscow, the Stalingrad counter-offensive, the battles of Kharkov and Kursk, Operation "Bagration," and more. It features the major and many minor tanks that saw action on the Eastern Front, and also includes numerous Lend-Lease Armored fighting vehicles as well as many examples of Soviet light vehicles, self-propelled guns, tractors, and trucks. Military modelers and World War II enthusiasts will find this an invaluable reference. Reissue with a new cover design.

Since leaving the British Ministry of Defence in 2006 after 29 years' service, David Porter has worked on a number of research projects, contributing articles and book reviews to the BBC History Magazine, the British Army Review, and the Royal Engineers Journal.
Loading...
or support indie stores by buying on
(This book is on backorder)