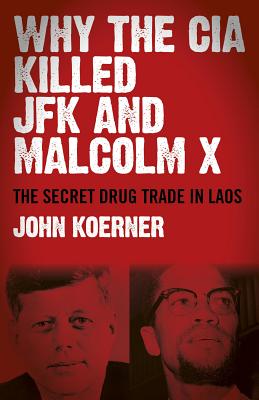 Why the CIA Killed JFK and Malcolm X

The Secret Drug Trade in Laos

This book breaks new ground in two important areas that have yet to be linked and explored by any JFK-assassination historian. John Koerner argues that the CIA's secret drug trade in Laos, and the president's effort to end it, provided the primary motive that the CIA needed to assassinate the president. A lot of effort has been made to examine the president's Vietnam policy, but precious little attention has been paid to the opium trade in Laos that was making the CIA wealthy and powerful beyond its wildest dreams. This book chronicles the president's secret war with the CIA over Laos, a high-stakes game that cost him his life. Koerner also links the JFK assassination and the drug trade with the other three major assassinations of the 1960s: Malcolm X, Martin Luther King, and Robert F. Kennedy. We will see that all four of the assassinations are linked together, all funded and executed by the CIA to silence the four most vocal leaders who were opposed to the agency's pro-war and pro-drug policy in Laos and Vietnam. Finally, Koerner examines the impact this has had on the course of history, and imagines a world where these men had lived.

John Koerner is an author of several historical books and a professor of American History. He is also the founder of Paranormal Walks, LLC. Koerner has appeared on America's Book of Secrets on the History Channel, and William Shatner's Weird or What on the Discovery Channel. He lives in Buffalo, New York.
Loading...
or
Not Currently Available for Direct Purchase