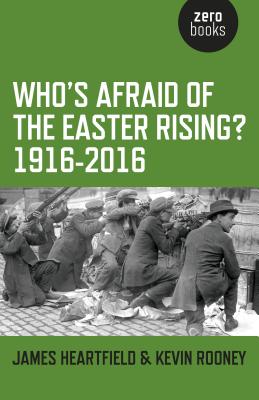 One hundred years ago, Easter 1916, Irish revolutionaries rose against the British Empire proclaiming a Republic from the steps of the General Post Office in Dublin. The men and women of the Easter Rising were defeated by the overwhelming force of the British Army, in five days of intense fighting. Their leaders were executed. But the Easter Rising lit a fire that ended with the whole country turning against Westminster's rule, and founding a nation. But today, the heirs to the Irish state are embarrassed about 1916. They are ashamed that their state owes its origins to a revolution. Along with academics and other commentators in the press and on television they dismiss the Rising as the work of violent fanatics, and the defeat of constitutional politics. Who's Afraid of the Easter Rising? explains why today's Dublin elite are recoiling from the origins of their state in a popular struggle. Where the critics paint the Rising as an armed conspiracy, we explain that it was in fact a revolt against war; not a militaristic upsurge, but the first challenge to the awful slaughter of the First World War. The Statesmen of Europe sacrificed millions upon the altar of war. Their recruiting sergeants in Ireland, Edward Carson and John Redmond sent 200,000 Irishmen into the slaughter and nearly 50,000 were killed. The Easter Rising drew a halt to British recruitment, and the blow to the Empire was the first crack in a growing revolt against the war, followed by the Russian Revolution in 1917, and the German revolution the following year which ended the conflict. The Easter Rising was an inspiration to those who were challenging the Empires of Europe, from India to Vietnam, from New Zealand to Moscow; it was an inspiration to British activists like John Maclean and Sylvia Pankhurst; and it was an inspiration to the Irish men and women who rose up against British rule to free their nation.

James Heartfield has worked as a journalist, for a television company, as a lecturer and an editor. He lives in North London with his wife and two daughters. Kevin Rooney is a teacher and writer. He first took part in the Commemoration of the Easter Rising in Belfast, 1972.
Loading...
or
Not Currently Available for Direct Purchase