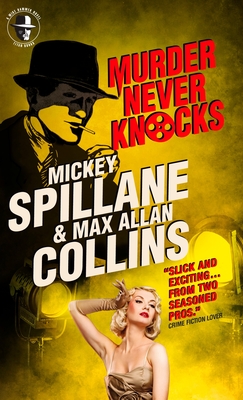 A failed attempt on his life by a contract killer gets Mike Hammer riled up. But it also lands him an unlikely job: security detail for a Hollywood producer having a party to honor his beautiful fiancée, a rising Broadway star. But it’s no walk in the park, as Hammer finds violence following him and his beautiful P.I. partner Velda into the swankiest of crime scenes.

In the meantime, Hammer is trying to figure out who put the hitman on him. Is there a connection with the shooting of a newsstand operator who took a bullet meant for him? A shadowy figure looking for the kill of his life?

Mickey Spillane is the legendary crime writer credited with igniting the explosion of paperback publishing after World War II as a result of the unprecedented success of his Mike Hammer novels, feeding the public's appetite for sexy, violent, straight-talking crime stories. He also starred as Mike Hammer in The Girl Hunters. Mickey Spillane died at the age of 88 in 2006.

Max Allan Collins is the author of Road to Perdition, the acclaimed graphic novel that inspired the movie, and of the multiple-award-winning Nathan Heller series of historical hardboiled mysteries. Max Allan Collins is one of most prolific and popular authors working in the field today.  He is also the literary executor of Mickey Spillane.

"This novel supplies the goods: hard-boiled ambience, cynicism, witty banter, and plenty of tough-guy action." - Booklist Review
or support indie stores by buying on
(This book is on backorder)
Copyright © 2020 American Booksellers Association