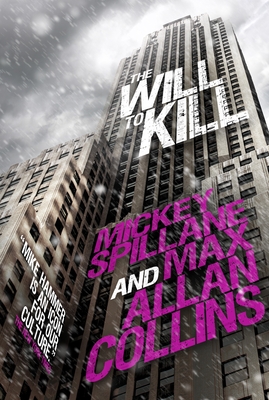 Mike Hammer - The Will to Kill

Taking a midnight stroll along the Hudson River, Mike Hammer gets more than he bargained for: a partial corpse on an ice floe. The body is that of a butler who spent the last years of his life working for a millionaire—also now deceased—and his notoriously privileged children.

Were both master and servant murdered? Captain Pat Chambers thinks so. But to prove it Hammer must travel to upstate New York to investigate the dead man’s family, all of whom have a motive for murder, and one of whom who has a taste for it.

Praise For Mike Hammer - The Will to Kill…

"fans of the originals are likely to be satisfied" - Publishers Weekly

"Collins has done an admirable service in not just continuing a popular series, but giving the tough guy detective more humanity. It’s subtle—a remark here, an observation there—and doesn’t detract from the take-no-prisoners character that Hammer has been for seventy years. It’s just that friendships with Pat Chambers and love for Velda have only deepened in all the right ways.
Spillane has said that true heroes never die, and the same undoubtedly can be said of his greatest creation, Mike Hammer." - Criminal Element


“no better reading news than a newly released Mike Hammer novel, at least not in my world”  -  Noir Journal

"Collins has done a masterful job of sticking to the form and treating modern readers to this mid-20th-century style of American mystery writing." - BookReporter

Mickey Spillane is the legendary crime writer credited with igniting the explosion of paperback publishing after World War II as a result of the unprecedented success of his Mike Hammer novels, feeding the public's appetite for sexy, violent, straight-talking crime stories. He also starred as Mike Hammer in The Girl Hunters. Mickey Spillane died at the age of 88 in 2006.

Max Allan Collins is the author of Road to Perdition, the acclaimed graphic novel that inspired the movie, and of the multiple-award-winning Nathan Heller series of historical hardboiled mysteries. Max Allan Collins is one of most prolific and popular authors working in the field today.  He is also the literary executor of Mickey Spillane.
or
Not Currently Available for Direct Purchase