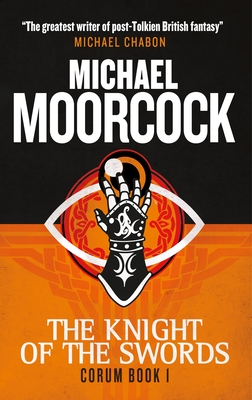 Corum - The Knight of Swords

The ancient races, the Vadhagh and the Nhadragh, are dying. By creating Mankind, the universe has condemned Earth to a pestilence of destruction and fear.

Prince Corum is the last remaining Vadhagh. He sets out on a crusade of vengeance against the forces that slaughtered his family and his race, to challenge the unjust power of the puppet masters of Man: the Lords of Chaos. Along the way he will barter with his soul for the limbs of gods to repair his mutilated body, and will encounter a member of the very race who caused the mutilation, the irresistible Rhalina...

Praise For Corum - The Knight of Swords: The Eternal Champion…

"Despite the new races, strange names, and exotic locations it is incredibly easy to be swept away into the adventure." - Portland Book Review

Born in London in 1939, Michael Moorcock now lives in Texas. A prolific and award-winning writer with more than eighty works of fiction and non-fiction to his name, he is the creator of Elric, Jerry Cornelius and Colonel Pyat, amongst many other memorable characters. In 2008, The Times named Moorcock in their list of "The 50 greatest British writers since 1945".
Loading...
or support indie stores by buying on