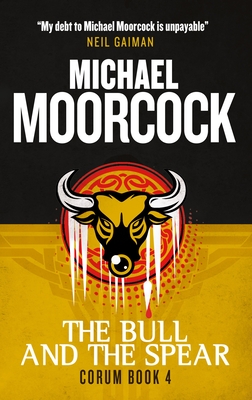 Corum - The Bull and the Spear (Paperback)

In the ancient Castle Erorn, Corum of the Scarlet Robe dwells in isolation and sorrow. He has out-lived his great love, Rhalina, and is tormented by voices in his dreams—a crowd of shadowy figures chanting his name. Unable to ignore their calls for help any longer, he will travel through eons of time to an age of tragedy, where the people of Tuha-na-Cremm Croich, descendants of Rhalina, are persecuted by the giant gods of the Cold Folk.
A great black bull has the power needed to defeat the monsters of a new age. But to tame the bull, the Eternal Champion must travel to the fatally beautiful island of Hy-Breasail to find the invincible and magical Spear Bryionak...

Born in London in 1939, Michael Moorcock now lives in Texas. A prolific and award-winning writer with more than eighty works of fiction and non-fiction to his name, he is the creator of Elric, Jerry Cornelius and Colonel Pyat, amongst many other memorable characters. In 2008, The Times  named Moorcock in their list of "The 50 greatest British writers since 1945".
or
Not Currently Available for Direct Purchase
Copyright © 2020 American Booksellers Association