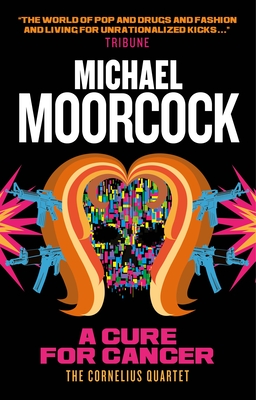 A Cure for Cancer

The Cornelius Quartet 2 (The Eternal Champion)

A mirror-image of his former self, Jerry Cornelius returns to a parallel London, armed with a vibragun and his infamous charisma and charm to boot. On the trail of the grotesque Bishop Beesley, Jerry hunts for a mysterious device capable of manipulating the cosmos. Corruption, violence and greed are rife in a war-torn Europe, but Jerry is against history; he is outside of history. He lusts for the equilibrium of anarchy, for randomness supreme—lock up your daughters (and sons), Jerry Cornelius is back.

Dunked into the ether of Chaos, the second book in the Cornelius Quartet, A Cure for Cancer, was one of the first novels of its form, using hypermedia to spin a web of hauntingly surreal scenes, wickedly funny social satire and sci-fi vignettes that resonate deeply for the modern reader.

Born in London in 1939, Michael Moorcock now lives in Texas. A prolific and award-winning writer with more than eighty works of fiction and non-fiction to his name, he is the creator of Elric, Jerry Cornelius and Colonel Pyat, amongst many other memorable characters. In 2008, The Times named Moorcock in their list of "The 50 greatest British writers since 1945".
Loading...
or
Not Currently Available for Direct Purchase