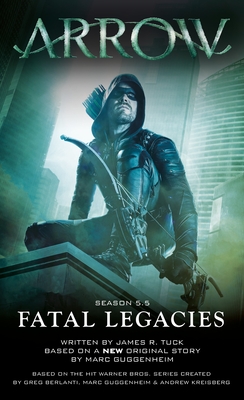 Set in the devastating aftermath of Season Five and leading into the thrilling events of Season Six...


ARROW: FATAL LEGACIES
...reveals for the first time what occurred as Team Arrow resumed its mission to protect Star City. Those who survived Prometheus’s trap on Lian Yu discover that Chase’s revenge continues far beyond his death. Sara Lance returns, Dinah Drake accepts the mantle of Black Canary, and the entire team hits the streets again. There can be no rest in this collaboration between Arrow Executive Producer Marc Guggenheim and author James R. Tuck, for if Chase’s deadly legacies can’t be stopped, countless more will die.

“Thoughtful and fun in equal measure, Fatal Legacies is a worthy companion to the TV show.” - Culturess


“James R. Tuck does a perfect job in putting the characters together, and making them flow beautifully. The action scenes are spot on, and this book fully complements the Arrow series” - Geekisphere

Marc Guggenheim is a screenwriter, television producer, and writer. He's written more than a dozen episodes of Arrow, works closely with the show's writing team, and has written graphic novel tie-ins to the show.

An avid Arrow expert and fan, James R. Tuck is the co-author of the Robin Hood: Demon's Bane trilogy and the Deacon Chalk series.
Loading...
or
Not Currently Available for Direct Purchase