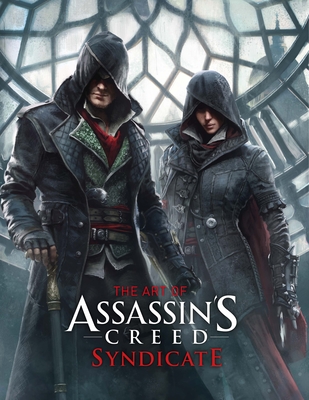 The Art of Assassin's Creed

With 91 million units sold worldwide, Ubisoft’s Assassin’s Creed franchise is established as one of the best-selling game series ever. Recognized for having some of the richest, most-engrossing art and storytelling in the industry, Assassin’s Creed transcends video games, branching into other entertainment experiences including comic books, novels, short films and an impressive merchandise line-up.

The recently announced Assassin’s Creed Syndicate takes players into the underbelly of Victorian London at a time when the Industrial Revolution is in full swing. The depth and attention to detail in the artwork brings London to life around you. This volume contains hundreds of never-before-seen concept arts, including sketches, final paintings, 3D renders and texture studies, all sitting alongside insightful and comprehensive commentary from the artists and developers.

Highlights in the book include a close look at the London Boroughs, each realized in extraordinary detail, staying true to both the historical roots of the area and giving each their own visual identity and population. Intricately rendered buildings tower over slums and iconic thoroughfares while Jacob Frye, our newest Assassin, fights for control of the gangs roaming the streets of London.


© 2015 Ubisoft Entertainment. All Rights Reserved. Assassin’s Creed, Ubisoft and the Ubisoft logo are trademarks of Ubisoft in the U.S. and/or other countries.

Praise For The Art of Assassin's Creed: Syndicate…

“Beautifully rendered illustrations that cover characters, elements, and the city itself..flanked by facts and descriptions of the thoughts that went into the designs. If you love behind-the-scenes stuff and Assassin’s Creed, then this book is for you.” - Brutal Gamer gift guide

“The Art of Assassin’s Creed Syndicate features a lot of gorgeous painted artwork and will be a delight for lovers of the video game series, painted art, and late 1800s industrial England.” - Die Hard Game Fan

“It is a pleasure to read” - Artbook Passion

"Each of the books’ 192 pages is absolutely covered in gloriously bleak artwork covering the many boroughs that make up the world of Syndicate. You’ll also find plenty of fascinating concept art and early renderings of the iconic Assassin’s gear as it shifted to a fittingly industrialized Steampunk -inspired aesthetic over the course of the game’s two-year development cycle." - Hey Poor Player

"Gives us a detailed look at how the visuals of the game came together." - Aint it Cool Gift Guide

“Beautifully rendered illustrations that cover characters, elements, and the city itself coat the heavy-stock pages and are flanked by facts and descriptions of the thoughts that went into the designs. If you love behind-the-scenes stuff and Assassin’s Creed, then this book is for you.” - Brutal Gamer

"If you are a fan of the game, or just a fan of gorgeous concept art, this book continues a string of amazing collections from Titan Books." - Gaming Trend

"A beautiful book that would fit into any gamer’s library." - Gamers Sphere

“The overall book is very detailed and interested to read, especially for fans of the AC series. It offers a full view of the major aspects of the game and it’s interesting to see some of the original concept work and how much development went into things many fans may look at as simple minutiae of a hit game” - Entertainment Buddha

Paul Davies has worked in gaming journalism for twenty years, writing and editing magazines and websites including Official Nintendo and Computer & Video Games. He is the co-founder and director of media agency Unlikely Hero Ltd. whose clients include Yahoo! UK and Microsoft. He is the author of several acclaimed gaming art books such as The Art of Watch_Dogs and the bestselling The Art of Assassin’s Creed Unity.
Loading...
or support indie stores by buying on
(This book is on backorder)