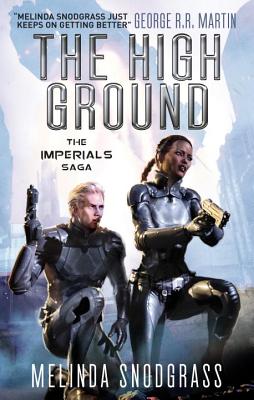 Emperor's daughter Mercedes is the first woman ever admitted to the High Ground, the elite training academy of the Solar League's Star Command, and she must graduate if she is to have any hope of taking the throne. Her classmate Tracy has more modest goals--to rise to the rank of captain, and win fame and honor. But a civil war is coming and the political machinations of those who yearn for power threatens the young cadets. In a time of intrigue and alien invasion, they will be tested as they never thought possible.

Praise For The High Ground: Imperials 1…

“Space opera with a social conscience as well as lots of sprawling action.” DAVID DRAKE, bestselling author of With the Lightnings

“Written with an easy elegance. The opening salvo of what promises to be a grand space opera.” BENNETT R. COLES, author of Virtues of War

"Snodgrass has done a wonderful job of depicting how aristocrats and society would work in world where aliens and space travel is an every-day norm." - Gamers Sphere

"If you like Downton Abbey/Sense & Sensiblity drama with a mix of science-fiction action, then I suggest reading Melinda Snodgrass’ The High Ground." - Retrenders

Melinda Snodgrass has written multiple novels and screenplays, and is best known for her work on Star Trek: The Next Generation. She has also worked on numerous other shows, including The Profilers, Sliders and Seaquest DSV. She coedits the Wild Cards series with George R.R. Martin. Melinda is the author of The Edge series, which is published by Tor Books in the US and Titan Books in the UK. She lives in Santa Fe, New Mexico.
Loading...
or
Not Currently Available for Direct Purchase