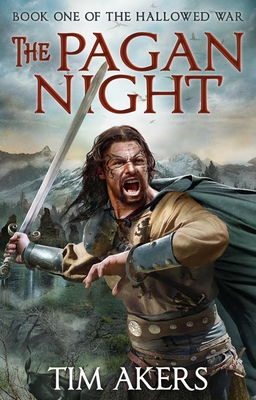 The Celestial Church has all but eliminated the old pagan ways, ruling the people with an iron hand. Demonic gheists terrorize the land, hunted by the warriors of the Inquisition, yet it’s the battling factions within the Church and age-old hatreds between north and south that tear the land apart.

Malcolm Blakley, hero of the Reaver War, seeks to end the conflict between men, yet it will fall to his son, Ian, and the huntress Gwen Adair to stop the killing before it tears the land apart. The Pagan Night is an epic of mad gods, inquisitor priests, holy knights bound to hunt and kill, and noble houses fighting battles of politics, prejudice, and power.

Praise For The Pagan Night: The Hallowed War 1…

“Take a bit of fantasy, mix in the horror of the demonic, and put in some top notch writing and you’ll have Akers’ latest novel." - Hellnotes

Tim Akers was born in deeply rural North Carolina, the only son of a theologian. He is the author of the Burn Cycle from Solaris Books, as well as The Horns of Ruin, featuring Eva Forge, published by Pyr Books. This is his inaugural entry into epic fantasy.
Loading...
or support indie stores by buying on