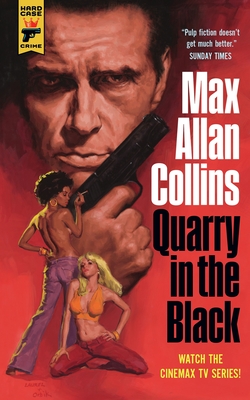 Quarry in the Black

WHERE DOES A HIT MAN DRAW THE LINE?

With a controversial presidential election just weeks away, Quarry is hired to carry out a rare political assignment: kill the Reverend Raymond Wesley Lloyd, a passionate Civil Rights crusader and campaigner for the underdog candidate. But when a hate group out of Ferguson, Missouri, turns out to be gunning for the same target, Quarry starts to wonder just who it is he’s working for.

The longest-running series from Max Allan Collins, author of Road to Perdition, the Quarry novels tell the story of a paid assassin with a rebellious streak and an unlikely taste for justice. Once a Marine sniper, Quarry found a new home stateside with a group of contract killers. But some men aren’t made for taking orders -- and when Quarry strikes off on his own, God help the man on the other side of his nine-millimeter...

Praise For Quarry in the Black…

"QUARRY IN THE BLACK is highly recommended to both devoted followers of the series and those just discovering it. It is a noteworthy addition to the expanding series, and another triumph for one of crime fiction’s most prolific and creative practitioners." - Bookgasm

"Bullets fly, bodies fall and in the end, Quarry, as ever, unmasks the truth for all its sweet bitterness." - Pulp Fiction Reviews

"Quarry in the Black is full of steamy sex, seedy dialogue, and quick turns. The political threads of this book are reminiscent of the current American political struggles making this throwback a timely read. Quarry in the Black is a great introduction for people looking to get into the Quarry series and it works as a standalone novel. Another strong title from Hard Case Crime." - Crime Fiction Lover

Max Allan Collins is the author of Road to Perdition, the acclaimed graphic novel that inspired the movie, and of the multiple-award-winning Nathan Heller series of historical hardboiled mysteries. Max Allan Collins is one of most prolific and popular authors working in the field today.  He is also the literary executor of Mickey Spillane.
Loading...
or support indie stores by buying on