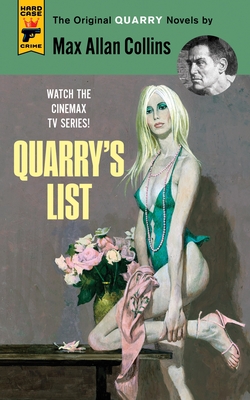 SOMETIMES INFORMATION
CAN BE THE MOST DANGEROUS WEAPON

When the man he worked for abruptly exits the business, Quarry finds himself in the crosshairs as a rival tries to take over. But what does Quarry have that the new man wants? And how did the beautiful blonde in the swimming pool become a target?

The longest-running series from Max Allan Collins, author of Road to Perdition, and the first ever to feature a hitman as the main character, the Quarry novels tell the story of a paid assassin with a rebellious streak and an unlikely taste for justice. Once a Marine sniper, Quarry found a new home stateside with a group of contract killers. But some men aren't made for taking orders - and when Quarry strikes off on his own, god help the man on the other side of his nine-millimeter...

"His plots are tricky but never overly so; like the late, great Ross Thomas, he knows how to build a maze but not lose his readers in it before showing them a way out." - Booklist

"This reissue is a good entry point to the series for fans of gritty crime fiction, and showcases some of the prolific Collins's best work." - Publishers Weekly

Max Allan Collins is the author of Road to Perdition, the acclaimed graphic novel that inspired the movie, and of the multiple-award-winning Nathan Heller series of historical hardboiled mysteries, Max Allan Collins is one of most prolific and popular authors working in the field today.  He is also the literary executor of Mickey Spillane.
Loading...
or
Not Currently Available for Direct Purchase