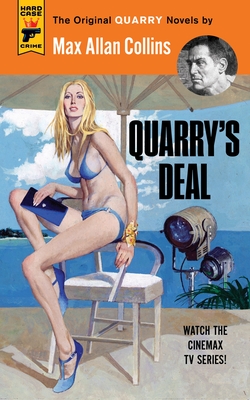 Behind the doors of an illegal casino, will Quarry find Lady Luck or a lady killer?

As part of his plan to target other hitmen, Quarry follows one from steamy Florida to the sober Midwest. But this killer isn’t a man at all – she’s a sloe-eyed beauty, as dangerous in bed as she is deadly on the job. Has Quarry finally met his match?

The longest-running series from Max Allan Collins, author of Road to Perdition, and the first ever to feature a hitman as the main character, the Quarry novels tell the story of a paid assassin with a rebellious streak and an unlikely taste for justice. Once a Marine sniper, Quarry found a new home stateside with a group of contract killers. But some men aren’t made for taking orders – and when Quarry strikes off on his own, God help the man on the other side of his nine-millimeter…

"Quarry’s Deal carries an archaic hardboiled sensibility of violence and misogyny, and on the surface is a diverting throw-back to the classic pulps." - Crime Fiction

Max Allan Collins is the author of Road to Perdition, the acclaimed graphic novel that inspired the movie, and of the multiple-award-winning Nathan Heller series of historical hardboiled mysteries, Max Allan Collins is one of most prolific and popular authors working in the field today.  He is also the literary executor of Mickey Spillane.
or support indie stores by buying on