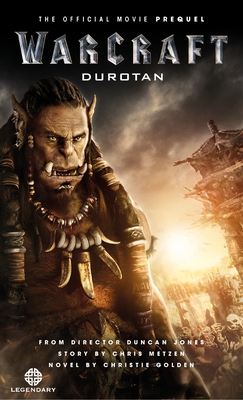 In the world of Draenor, the strong and fiercely independent Frostwolf Clan are faced with increasingly harsh winters and thinning herds. When Gul’dan, a mysterious outsider, arrives in Frostfire Ridge offering word of new hunting lands, Durotan, the Clan’s chieftain, must make an impossible decision: abandon the territory, pride and traditions of his people, or lead them into the unknown.

An original tale of survival, conflict and magic that leads directly into the events of Warcraft, an epic adventure from Legendary Pictures and Universal Pictures, based on Blizzard Entertainment’s global phenomenon.

“Fans of the strong and capable women in The Huntsman: Winter’s War will appreciate the well-crafted warriors Draka, Durotan’s determined mother Geyah, and the brave Garona.” - Borg

“If you’re new to the World of Warcraft and want to familiarize yourself with the major players in the movie:  Frostwolf leader Durotan, wife Draka, the magician Gul’dan and slave Garona, then this is the book to read.” - Retrenders

“If the character development is half as good as it is in this prequel, I’ll enjoy the film." -  Sci Fi Chick

Award-winning and seven-time New York Times bestselling author Christie Golden has written over forty novels and several short stories in the fields of science fiction, fantasy and horror. Among her many projects are over a dozen Star Trek novels, nearly a dozen for gaming giant Blizzard’s World of Warcraft and StarCraft novels, and three books in the nine-books Star Wars series, Fate of the Jedi,with Aaron Allston and Troy Denning.
Loading...
or support indie stores by buying on