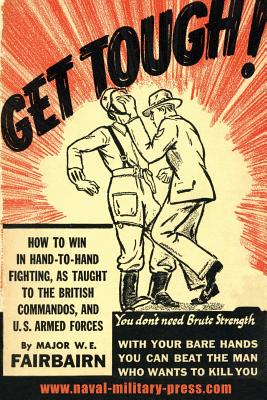 How To Win In Hand To Hand Fighting

﻿This book, by the man who taught them, shows how the British Commandos fought in the Second World War in unarmed hand-to hand combat. It shows how they won their fights - even against enemies who were bigger, stronger, and armed. Brute strength is not required. This book shows you how to put a thug out of action with your bare hands, so fast he won't know what's hit him.

"Get Tough" is filled with clear, graphic line drawings which, with the easy-to-follow directions, demonstrate the "Fairbairn System". The author, Major W. E. Fairbairn, was a tough Police officer who spent 30 years with the Shanghai Municipal Police, where he learned ju-jitsu (Judo), Chinese boxing and other martial arts. He was senior instructor to British Special Forces during the war, and was the co-inventor of the legendary Sykes-Fairbairn Commando knife. While in China he became the first foreigner, living outside Japan, ever admitted to Kodokan Jiu-Jutsu University in Tokyo where he was awarded the black belt, second degree. Combining all the knowledge thus acquired he developed a system that stopped the Shanghai terrorists in their tracks, demoralised the Nazis, and probably proved a decisive factor in the success of Allied Special forces in World War Two.

This is a "must" book for the armed forces, civilian defence groups, police, security guards, and indeed anyone whose life may be threatened.