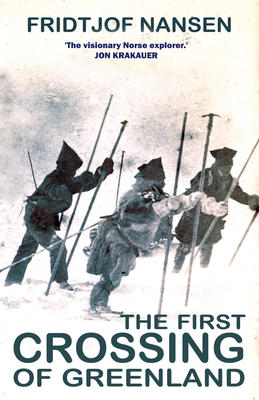 The First Crossing of Greenland

New edited edition of the ripping, true-life diaries of Nansen's audacious expedition to cross Greenland at a time when no one had ever undertaken arctic exploration of any kind.

At the time, no one had ever succeeded in or even seriously thought about penetrating the icy depths of Greenland. His plan for crossing with a small expedition, upwards with dogs which they would eat on the way, and then downwards on ski were received with scathing contempt. His contemporaries were used to huge expeditions, such as Livingstone's to inner Africa, with numerous servants required for survival. No one thought Nansen and his crew would live to reach the other side of Greenland. These gripping and tense diaries of their shared hardship show how they succeeded against the odds under Nansen's leadership.

Fridtjof Nansen (1861-1930) was the spiritual mentor to Amundsen, Scott and Shackleton and single-handedly made polar expeditions as popular as they are now. Drawn to extremes, obstinate and a restless Faustian character, he was a gifted writer, scientist and diplomat who received the Nobel Peace Prize in 1922.
Loading...
or support indie stores by buying on
(This book is on backorder)