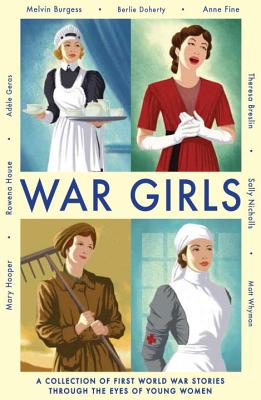 1914: war has broken out across Europe and beyond. Nothing will ever be the same again for those caught up in the conflict.
This collection of short stories explores how the First World War changed and shaped the lives of women forever. A courageous nurse risks her life at the Front Line; a young woman discovers independence and intrigue in wartime London; and a grief-stricken widow defends her homeland amidst the destruction of war.
Through these and other tales, War Girls presents a moving portrait of loss and grief, and of hope overcoming terrible odds.

ADELE GERAS was born in Jerusalem and travelled widely as a child. She started writing over twenty-five years ago and has published more than 80 titles. Ithaka was shortlisted for the Guardian Fiction Prize and the Whitbread Children's Book Award. She lives in Manchester with her husband and has two grown-up daughters and two grandchildren.

THERESA BRESLIN is the Carnegie Medal winning author of over forty books for children & young adults whose work has appeared on stage, radio and TV. Her books are hugely popular with young people, librarians and teachers. Remembrance, her top selling YA novel of youth in WW1, has now been reissued to include Book Notes. The Dream Master was shortlisted for the Children's Book Award. Divided City was shortlisted for ten book awards, winning two outright.

Anne Fine is one of our most distinguished writers for children. She has written over fifty highly acclaimed books and has won numerous awards, including the Guardian Children’s Fiction Prize and both the Whitbread Children’s Book of the Year and the Carnegie Medal twice over. Anne was appointed the Children’s Laureate from 2001-3, and her work has been translated into over forty languages. In 2003 she became a Fellow of the Royal Society of Literature and was awarded an OBE. Anne lives in County Durham.

Matt Whyman is a young-adult novelist and a long-standing advice columnist for many teenage magazines. Matt Whyman lives in West Sussex. He is married with four children.

Sally Nicholls grew up in Stockton-on-Tees, and after school, travelled the world, working for a period at a Red Cross hospital in Japan. Sally's first novel, Ways to Live Forever, won the Waterstones Children's Book Prize and she has been shortlisted for the Guardian Children's Fiction Prize, the Costa Children's Book Award, and the Carnegie Medal, twice. She lives in Oxford.

Mary Hooper has been writing professionally for over twenty years and has published nearly eighty books for children and young people. She has written funny books, 'issue' books and spooky books, and has now settled into doing what she loves best: writing historical novels centering around real situations (The Great Plague in 1665, for example) and real people (Anne Green, who was hanged for infanticide in Oxford, 1650).

Melvin Burgess was born in London and brought up in Surrey and Sussex. He has had a variety of jobs before becoming a full-time writer. Before his first novel, he had short stories published and a play broadcast on Radio 4. He is now regarded as one of the best writers in contemporary children's literature, having won the Carnegie Medal and the Guardian Children's Fiction Prize for his acclaimed novel Junk.

Berlie Doherty began writing for children in 1983, after teaching and working in radio. She has written more than 35 books for children, as well as for the theatre, radio and television. Berlie has won the Carnegie Medal twice: in 1987 for GRANNY WAS A BUFFER GIRL and in 1992 for DEAR NOBODY. She has also won the Writer's Guild Children's Fiction Award for DAUGHTER OF THE SEA. Her work is published all over the world, and many of her books have been televised.