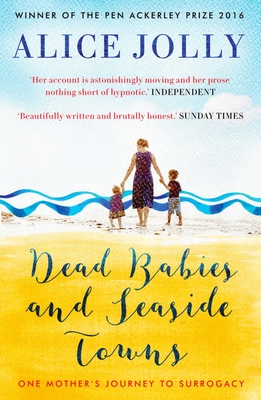 When Alice Jolly's second child was stillborn and all subsequent attempts to have another baby failed, she began to consider every possible option, no matter how unorthodox.

Shot through with humor and full of hope, Dead Babies and Seaside Towns is an intensely personal account of the search for an alternative way to create a family. As she battles through miscarriage, IVF and failed adoption attempts, Alice finds comfort in the faded charm of Britain's crumbling seaside towns.

The journey ultimately leads her and her husband to a small town in Minnesota, and to two remarkable women who offer to make the impossible possible.

In this beautifully written book, Alice Jolly describes with a novelist's skill the events that many others have lived through – even if they may feel compelled to keep them hidden. Her decision not to hide but to share them, without a trace of self-pity, turns Dead Babies and Seaside Towns into a universal story: one that begins in tragedy but ends in joy.

Alice Jolly is an award-winning novelist, playwright and teacher of creative writing. Her two novels (What the Eye Doesn’t See and If Only You Knew) are both published by Simon & Schuster. Her articles have been published in the Guardian, the Mail on Sunday and the Independent, and four of her plays have been produced by The Everyman Theatre in Cheltenham.

Jolly was awarded the 2016 PEN Ackerley Prize for Dead Babies and Seaside Towns, and in 2014 one of her short stories won the V.S. Pritchett Memorial Prize awarded by the Royal Society of Literature. Jolly teaches for the Arvon Foundation and on the Oxford University Master’s Degree in Creative Writing. She has three children – a son, a daughter who was stillborn and a daughter who was born to a surrogate mother in the United States. Her home is now in Stroud in Gloucestershire.