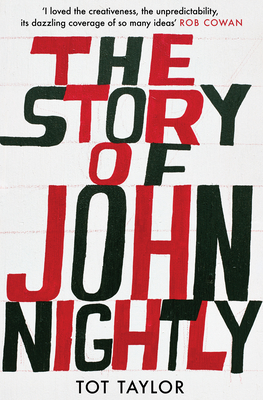 The Story of John Nightly

I loved the creativity, the unpredictability, its dazzling coverage of so many ideas' Rob Cowan 'Superb . . . An original character and an original book' David Quantick, Record Collector Can John Nightly be brought back to life again? John Nightly (b. 1948) finds his dimension in pop music, the art form of his time. His solo album becomes one of 1970's bestselling records - but success turns out to have side effects. Supermaxed in LA after a dazzling career, John renounces his gift, denying music and his very being, until he is rediscovered in Cornwall thirty years later by a teenage saviour dude, who persuades him to restore and complete his quasi-porto-multimedia eco-Mass, the Mink Bungalow Requiem. This epic novel mixes real and imagined lives in the tale of a young singer-songwriter, to tell a story about creativity at the highest level - the level of genius.

Tot Taylor is a writer, composer, art curator and music producer. He has worked in music, film, theatre and the visual arts since being signed by Island Records while still at school. For the past thirteen years, he has been co-curator of the Riflemaker gallery in Beak Street, Soho, which he co-founded with Virginia Damtsa. Their artists have been featured at Tate Modern, MoMA, the Pompidou Center and Frieze Masters, among others. The Story of John Nightly is his first novel.
Loading...
or support indie stores by buying on