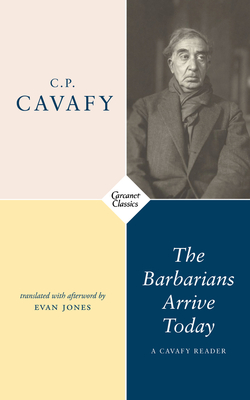 A Times Literary Supplement Book of the Year 2020. A Review 31 Book of the Year 2020. With The Barbarians Arrive Today, Evan Jones has produced the classic English Cavafy for our age. Expertly translated from Modern Greek, this edition presents Cavafy's finest poems, short creative prose and autobiographical writings, offering unique insights into his life's work. Born in Alexandria, Egypt, Constantine Petrou Cavafy (1863-1933) was a minor civil servant who self-published and distributed his poems among friends; he is now regarded as one of the most significant poets of the late nineteenth and early twentieth centuries, an influence on writers across generations and languages. The broad, rich world of the Mediterranean and its complex history are his domain, its days and nights of desire and melancholy, ambition and failure - with art always at the centre of life.

C.P. Cavafy was born in Alexandria, Egypt, where his Constantinopolitan Greek parents had settled in the mid-1850s. Cavafy spent his adolescence in England and Istanbul, but returned to Alexandria in 1885 where he worked as a journalist initially, and, from 1892 until his retirement in 1922, as a clerk in the Irrigation Office. Cavafy was not well-known in his lifetime, but found international recognition posthumously, and his admirers include Marguerite Yourcenar, Czeslaw Milosz, Leonard Cohen, Orhan Pamuk and Seamus Heaney.
Loading...
or
Not Currently Available for Direct Purchase