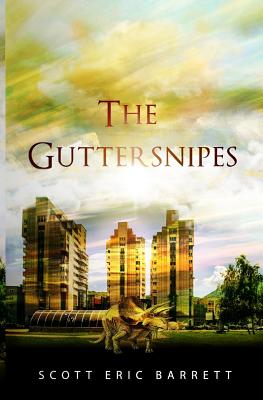 Charlie Daniels is more than six feet tall, allergic to almost everything, and has a pet dinosaur at home. His life in Arizona is relatively normal. That is, apart from the nightmares Charlie has... But when his dinosaur, Trike, gets kidnapped by a strange old lady and her cat-like sidekick, Charlie and his misfit friend Arty are sucked into a story bigger than both of them. Risking everything to rescue Trike, Charlie and Arty are flung into the past, landing in the chaos of New York City, 1865. Dodging the mysterious Nasten Cobblestine, and avoiding the perils of New York's nastiest street cleaners' strikes, test Charlie's wits as well as his courage. All he wants to do is reunite with his dinosaur and somehow find a way back home... As Charlie searches for Trike, he draws dangerously close to P.T. Barnum's eerie museum and the creature that lies within. Will he find Trike and get home alive? And who is the Ice Lady of his nightmares?

Scott Eric Barrett is an award-winning freelance writer and full-time editor from Glendale, Arizona. Scott has published more than fifty articles for various newspapers, history magazines, and educational publications. He completed his first novel, The Guttersnipes, in early 2015, and recently finished his second book, A Christmas Wish. Both fantasy adventures are fast-paced rides with twists and turns galore aimed at young and middle-grade readers. Scott's wife and daughter inspire him to work hard every day and stay resilient in a fiercely competitive industry that often forces young writers to give up on their dreams. www.scottericbarrett.net
Loading...
or support indie stores by buying on