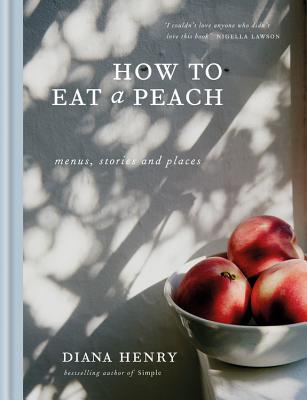 How to Eat a Peach (Hardcover)

Named one of the best cookbooks of the year by The Washington Post, The New Yorker, Rachel Ray Every Day, NPR and The Boston Globe.

When Diana Henry was sixteen she started a menu notebook (an exercise book carefully covered in wrapping paper). Planning a menu is still her favorite part of cooking.

Menus can create very different moods; they can take you places, from an afternoon at the seaside in Brittany to a sultry evening eating mezze in Istanbul. They also have to work as a meal that flows and as a group of dishes that the cook can manage without becoming totally stressed. The 24 menus and 100 recipes in this book reflect places Diana loves, and dishes that are real favorites.

The menus are introduced with personal essays in Diana's now well-known voice- about places or journeys or particular times and explain the choice of dishes. Each menu is a story in itself, but the recipes can also stand alone.

The title of the book refers to how Italians end a meal in the summer, when it's too hot to cook. The host or hostess just puts a bowl of peaches on the table and offers glasses of chilled moscato (or even Marsala). Guests then slice their peach into the glass, before eating the slices and drinking the wine.

That says something very important about eating - simplicity and generosity and sometimes not cooking are what it's about.

Diana Henry won a James Beard Award for A Bird in the Hand. She has a weekly column in The Sunday Telegraph, writes for BBC Good Food, Red and House & Garden, and is a regular broadcaster on BBC Radio 4. She has won numerous awards for her journalism and books, including Cookery Journalist of the Year from the Guild of Food Writers (three times) and Cookery Writer of the Year at the Fortnum & Mason Food Awards in 2013 and 2015. How to Eat a Peach is Diana's 11th book.

Praise For How to Eat a Peach: Menus, Stories and Places…

'This is an extraordinary piece of food writing, pitch perfect in every way. I couldn't love anyone who didn't love this book.'—Nigella Lawson

"Who's the Best British Food Writer? (Clue: It Isn't Nigella or Jamie)Why you should know the wonderful, warm, and always delicious Diana Henry."
—Martha Stewart Living


"The unstoppable Ms. Henry does it again."
—Bon Appetit


"Lyrical British cookbook author Diana Henry has a new collection of recipes and storiesthat is a must-read. Divided by seasons, it's a unique grouping. But even more special is Henry's writing: beautiful, evocative and so inviting. A gem!"—Kathy Gunst, NPR

"There is poetry in menus," she writes in HOW TO EAT A PEACH: Menus, Stories,'They can transport you to the Breton coast, or to a Saturday night in Manhattan; they are short stories.' From anyone else, this kind of sentiment might signal the earnest preciousness that rings food writing's death knell. Not from Henry, who's built her brand on what you might call poetic practicality."—The New York Times Book Review


"One of the most literary of food writers... The British cookbook author has embedded a lusty memoir in her latest recipe collection."—Lauren Collins, The New Yorker


"This is exceptional writing about food."
—Bonnie Benwick, The Washington Post


"You'll revisit this cookbook again and again. "How to Eat a Peach," by the popular British author, merits special attention because it delivers timeless and thoughtful food writing, accompanied by handsome visual vignettes."—Bonnie Benwick, The Washington Post


" It's full of beautiful pictures of beautiful food and recipes that really won me over. Bonus: The cover is fuzzy. Just like a peach."
—Rachel Ray Everyday


" British food writer Diana Henry serves up evocative meals and prose, taking cooks through seasons, cities, and moments in her life that can now be moments in yours. The menu titles alone are enough to lure you into the kitchen."
—Devra First, The Boston Globe


"Experiential is exactly how I'd describe "How to Eat a Peach," whose cover even has a gentle fuzz like a peach skin. Each menu transports not always to a specific locale, but a sort of place of time, the joy of a beautiful moment with food."
—The Washington Herald

Diana Henry is "one of the few UK-based "cookery" authors whose flavor profiles and recipes are just as appealing on this side of the pond - Yotam Ottolenghi is another - and her latest book, "How to Eat a Peach: Menus, Stories and Places" is a classic example of why."
—Addie Broyles, Austin American Statesman

"There's an elegant quality to the way she artfully folds her inventive recipes with her stories that is harmonious yet approachable for the home cook."—Nik Sharma, A Brown Table


"Any book by Diana Henry is one you want to add to your kitchen library."—Cooking by the Book


"sure to become another bestseller."
—Gotham

"How to Eat a Peach ) is British food writer Diana Henry's best cookbook yet, because she groups stellar recipes into two-dozen menus organized thematically, and shares personal essays on memories of place and meals"
—The Globe and Mail
or
Buy Here
Copyright © 2020 American Booksellers Association