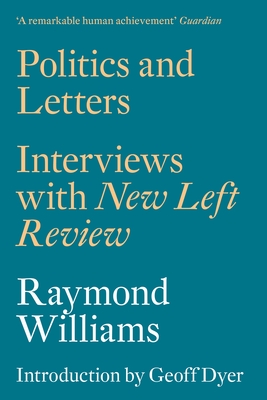 Raymond Williams made a central contribution to the intellectual culture of the Left in the English-speaking world. He was also one of the key figures in the foundation of cultural studies in Britain, which turned critical skills honed on textual analysis to the examination of structures and forms of resistance apparent in everyday life. Politics and Letters is a volume of interviews with Williams, conducted by New Left Review, designed to bring into clear focus the major theoretical and political issues posed by his work. Introduced by writer Geoff Dyer, Politics and Letters ranges across Williams’s biographical development, the evolution of his cultural theory and literary criticism, his work on dramatic forms and his fiction, and an exploration of British and international politics.

Praise For Politics and Letters: Interviews with New Left Review…

“Effectively a new kind of book ... an outstanding feat of composition ... a remarkable human achievement.”
—Guardian

“For anybody interested in the relationship between literature and society in the nineteenth and twentieth centuries this book is essential reading.”
—Financial Times

“This is, quite simply, one of the most magnificent books I have read.”
—Philip Corrigan, Media, Culture and Society

“Raymond Williams has made a more persistent attempt to grasp the nature of this relation [between politics and letters] than any living British writer.”
—London Review of Books

“These questions elicit measured, honest and extensive responses from Williams. Literature, politics, history and society: all the tributaries of his thought are arranged, chronologically and thematically, and flow from his Welsh childhood to his mature thoughts on the landscape of British politics just before Thatcher’s rise to power.”
—The Australian

Raymond Williams (1921–1988) was for many years Professor of Drama at the University of Cambridge. Among his many books are Culture and Society, Culture and Materialism, Politics and Letters, Problems in Materialism and Culture, and several novels.

Geoff Dyer is the author of several novels and works of nonfiction, including Another Great Day at Sea, The Ongoing Moment, Jeff in Venice, Death in Varanasi, and The Missing of the Somme.
Loading...
or
Not Currently Available for Direct Purchase