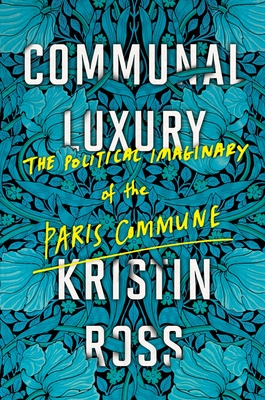 Kristin Ross’s highly acclaimed work on the thought and culture of the Communard uprising of 1871 resonates with the motivations and actions of contemporary protest, which has found its most powerful expression in the reclamation of public space. Today’s concerns—internationalism, education, the future of labor, the status of art, and ecological theory and practice—frame and inform her carefully researched restaging of the words and actions of individual Communards. This original analysis of an event and its centrifugal effects brings to life the workers in Paris who became revolutionaries, the significance they attributed to their struggle, and the elaboration and continuation of their thought in the encounters that transpired between the insurrection’s survivors and supporters like Marx, Kropotkin, and William Morris.


Praise For Communal Luxury: The Political Imaginary of the Paris Commune…

“An essential resource for all those on the Left.”
—Mark Hutchinson, Art & the Public Sphere

Kristin Ross was born in State College, Pennsylvania in 1953. She attended the University of California at Santa Cruz and received a PhD in French Literature from Yale in 1981. She is the author of a number of books on modern French politics and culture, all of which have been widely translated: The Emergence of Social Space: Rimbaud and the Paris Commune (Minnesota, 1988; Verso, 2008); Fast Cars, Clean Bodies: Decolonization and the Reordering of French Culture (MIT, 1995); May 68 and its Afterlives (Chicago, 2002), and Communal Luxury: The Political Imaginary of the Paris Commune (Verso, 2015). She has also translated works by Jacques Rancière and by the militant collective, Mauvaise Troupe. She lives in Stone Ridge, New York and Paris.
Loading...
or
Not Currently Available for Direct Purchase