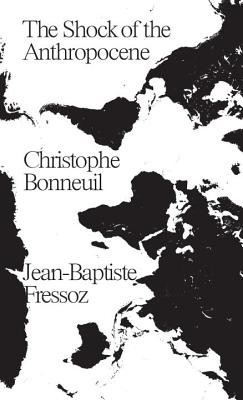 The Shock of the Anthropocene

The Earth, History and Us

Dissecting the new theoretical buzzword of the “Anthropocene”

The Earth has entered a new epoch: the Anthropocene. What we are facing is not only an environmental crisis, but a geological revolution of human origin. In two centuries, our planet has tipped into a state unknown for millions of years.

How did we get to this point? Refuting the convenient view of a “human species” that upset the Earth system, unaware of what it was doing, this book proposes the first critical history of the Anthropocene, shaking up many accepted ideas: about our supposedly recent “environmental awareness,” about previous challenges to industrialism, about the manufacture of ignorance and consumerism, about so-called energy transitions, as well as about the role of the military in environmental destruction. In a dialogue between science and history, The Shock of the Anthropocene dissects a new theoretical buzzword and explores paths for living and acting politically in this rapidly developing geological epoch.

Praise For The Shock of the Anthropocene: The Earth, History and Us…

“This is the first book to seriously come to terms—philosophically and psychologically as well as scientifically—with the overwhelming planetary transformation implied by the word ‘Anthropocene.’ Bonneuil and Fressoz have done humanity a great service by thinking through the startling issues raised by the fact that our species has launched the entire ecosphere onto a new and frightening trajectory.”
—Richard Heinberg, Senior Fellow, Post Carbon Institute

“This bold, brilliantly argued history of the Anthropocene epoch is a corrective to cosy thinking about humanity’s grave disruptions to Earth systems … [Bonneuil and Fressoz] call for a ‘new environmental humanities,’ and a shift away from market-based approaches that feed the beast.”
—Barbara Kiser, Nature

“At a time when the word ‘Anthropocene’ is becoming so fashionable, this well-documented and well-argued book will help readers sort out the various meanings of this most unstable label … The authors show the bewildering varieties of historical actors at work in what is called the ‘environmental crisis.’”
—Bruno Latour, author of Inquiry into Modes of Existence

“A very important book. In this historically rich and meticulously detailed work, Bonneuil and Fressoz show us how to keep our head without losing our heart to technocracy.”
—Timothy Morton, author of Hyperobjects: Philosophy and Ecology after the End of the World

“Cleverly argued and extremely compelling, this book offers a remarkably timely analysis and critique of the very notion of the Anthropocene. It’s widely held that modern industrial societies innocently and ignorantly generated the forces that have wrought such dramatic ecological effects on their world. It’s also believed that only very recently, because of the heroic work of a few visionaries, has this ignorance been overcome and the truth of the Anthropocene at last revealed. Using an astonishing range of sources from climate sciences and economics, history and technology, Bonneuil and Fressoz brilliantly show the utter falsity of this story, and why it matters so much.”
—Simon Schaffer, University of Cambridge

“This revelatory, lucid and daring book rejects the delusions of control implicit in conventional environmentalism, and outlines the enormity of the changes necessary for us to continue to live in the Anthropocene.”
—David Edgerton, King’s College London

“A timely book which firmly grounds history in the stuff that the sciences now tell us about what commodified life does to the planet. This is an essential volume for the project of historical thought and action.”
—McKenzie Wark, author of Molecular Red: Theory for the Anthropocene

“In questioning the idea of an apolitical Anthropocene and raising the spectre of a new self-selecting scientific geocracy, their book should begin a vital discussion. We do need a new politics of the Anthropocene.”
—New Scientist

“Very well written and highly readable … I recommend the book highly. It is currently the most lucid and comprehensive introduction to ‘Anthropocene discourse.’”
—Noel Castree, Antipode

“A wide-ranging essay that combines elements of environmental history, history of science and technology, and economic and intellectual history, while covering an extensive geographic base including British, American, French, and German cases.”
—Public Books

“A detailed, data-driven, and well-argued critique of conventional thought on enormity of the challenges and changes that lay ahead for humanity on an Earth that is irreparably damaged by our actions. It should be a central addition to readers’ climate change libraries.”
—James H. McDonald, New York Journal of Books

“Challenges the certainties of our modernity, our mode of development and our view of the world.”
—Libération

“What histories must we write as we learn to inhabit the Anthropocene? This book offers an excellent starting place.”
—Geoscientist

“This is an important book, an informative and interesting book, and anyone thinking about where we go from here should read it.”
—Nathalie Bennett, Ecologist

“Impressively researched, intellectually rigorous and elegantly written … it should be assigned reading for all current and aspiring Anthropocenologists.”
—Environment and History

“One of the most insightful books on the Anthropocene.”
—Ecozoïc

Christophe Bonneuil is a historian at the Centre national de la recherche scientifique and edits the Anthropocène series for Editions du Seuil.

Jean-Baptiste Fressoz, formerly a lecturer at Imperial College, London, is now a historian at the Centre national de la recherche scientifique.
Loading...
or
Not Currently Available for Direct Purchase