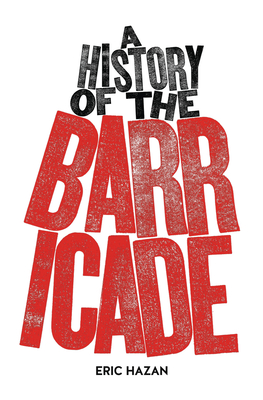 A History of the Barricade (Hardcover)

How the French invented the barricade, and its symbolic impact on popular protests throughout history

In the history of European revolutions, the barricade stands as a glorious emblem. Its symbolic importance arises principally from the barricades of Eric Hazan’s native Paris, where they were instrumental in the revolts of the nineteenth century, helping to shape the political life of a continent.

The barricade was always a makeshift construction (the word derives from barrique or barrel), and in working-class districts these ersatz fortifications could spread like wildfire. They doubled as a stage, from which insurgents could harangue soldiers and subvert their allegiance. Their symbolic power persisted into May 1968 and, more recently, the Occupy movements.

Hazan traces the many stages in the barricade’s evolution, from the Wars of Religion through to the Paris Commune, drawing on the work of thinkers throughout the periods examined to illustrate and bring to life the violent practicalities of revolutionary uprising.

Eric Hazan is the founder of the publisher La Fabrique and the author of several books, including Notes on the Occupation, A People’s History of the French Revolution and the highly acclaimed The Invention of Paris. He has lived in Paris, France, all his life.

Praise For A History of the Barricade…

“A History of the Barricade is essential reading for anyone seeking a guided tour of revolutionary Paris … Hazan’s book is arguably the most readable, and constitutes a marvelous introduction to the history of revolt.”
—Daniel Benson, Left History

“Hazan’s short survey, peppered with contemporary quotes and outlining the story of the barricade across three centuries, would provide an engaging introduction to the subject for the general reader or undergraduate student.”
—Laura O’Brien, French History
or
Not Currently Available for Direct Purchase
Copyright © 2020 American Booksellers Association