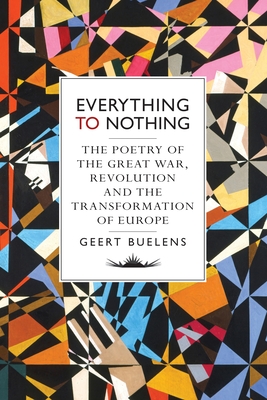 Everything to Nothing (Hardcover)

The Poetry of the Great War, Revolution and the Transformation of Europe

This tumult, sometimes referred to as ‘the literary war’, saw an extraordinary outpouring of writing. The conflict opened up a vista of possibilities and tragedies for poetic exploration, and at the same time poetry was a tool for manipulating the sentiments of the combatant peoples. In Germany alone during the first few months there were over a million poems of propaganda published. We think of war poets as pacifistic protestors, but that view has been created retrospectively. The verse of the time, particularly in the early years of the conflict—in Fernando Pessoa or Filippo Tommaso Marinetti, for example—could find in the violence and technology of modern warfare an awful and exhilarating epiphany.

In this cultural history of the First World War, the conflict is seen from the point of view of poets and writers from all over Europe, including Rupert Brooke, Anna Akhmatova, Guillaume Apollinaire, Gabriele D’Annunzio, Vladimir Mayakovsky, Rainer Maria Rilke and Siegfried Sassoon.

Everything to Nothing is the award-winning panoramic history of how nationalism and internationalism defined both the war itself and its aftermath—revolutionary movements, wars for independence, civil wars, the treaty of Versailles. It reveals how poets played a vital role in defining the stakes, ambitions and disappointments of postwar Europe.

Praise For Everything to Nothing: The Poetry of the Great War, Revolution and the Transformation of Europe…

“Geert Buelens’ extraordinary, novelistic study of the poetry of the Great War concludes ‘so that was the First World War … a Twin Tower every afternoon.’ Buelens’ concern to make the events of over a century ago measurable by contemporary standards introduces a radically new perspective to the field of war poetry studies.”
—Review 31

“An incredibly diligent, knowledgeable and moreover well-written book on the European writers from before and during the war. An essential read.”
—Die Zeit

“Truly magnificent … A choir of voices streamlined in a narrative discourse which shatters the monolithic image of the John McCrae–like melancholic War Poet.”
—De Leeswolf

“Reads like a novel … A story that has never been told before … The book shows how poets all over Europe were co-responsible for the cultural crisis that lead to this war and how they were important critics of the idea of Europe.”
—Spiegel der Letteren
or
Not Currently Available for Direct Purchase
Copyright © 2020 American Booksellers Association