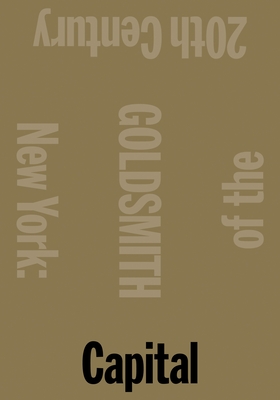 It is also a book of experimental literature that transposes Walter Benjamin’s unfinished magnum opus of literary montage on the modern city, The Arcades Project, from nineteenth-century Paris to twentieth-century New York, bringing the streets and its inhabitants to life in categories such as “Sex,” “Central Park,” “Commodity,” “Loneliness,” “Gentrification,” “Advertising,” and “Mapplethorpe.”

Capital is a book designed to fascinate and to fail—for can a megalopolis truly ever be captured in words? Can a history, no matter how extensive, ever be comprehensive? Each reading of this book, and of New York, is a unique and impossible project.

Kenneth Goldsmith is the founding editor of UbuWeb, teaches Poetics and Poetic Practice at the University of Pennsylvania and is Senior Editor of PennSound. He was an artist and sculptor for many years before taking up conceptual poetry. He has since published ten books of poetry and is the author of a book of essays, Uncreative Writing: Managing Language in a Digital Age.

“As massive, intimidating and fascinating as its subject … The book is much like the city it describes: once you start exploring, you won’t want to stop.”
—Spectrum Culture
or
Not Currently Available for Direct Purchase
Copyright © 2020 American Booksellers Association