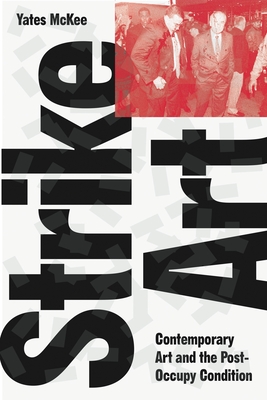 Contemporary Art and the Post-Occupy Condition

The collision of activism and contemporary art, from the Seattle protests to Occupy and beyond

The collision of activism and contemporary art, from the Seattle protests to Occupy and beyond What is the relation of art to the practice of radical politics today? Strike Art explores this question through the historical lens of Occupy, an event that had artists at its core. Precarious, indebted, and radicalized, artists redirected their creativity from servicing the artworld into an expanded field of organizing in order to construct of a new—if internally fraught—political imaginary set off against the common enemy of the 1%. In the process, they called the bluff of a contemporary art system torn between ideals of radical critique, on the one hand, and an increasing proximity to Wall Street on the other—oftentimes directly targeting major art institutions themselves as sites of action.

Tracking the work of groups including MTL, Not an Alternative, the Illuminator, the Rolling Jubilee, and G.U.L.F, Strike Art shows how Occupy ushered in a new era of artistically-oriented direct action that continues to ramify far beyond the initial act of occupation itself into ongoing struggles surrounding labor, debt, and climate justice, concluding with a consideration of the overlaps between such work and the aesthetic practices of the Black Lives Matter movement.

Art after Occupy, McKee suggests, contains great potentials of imagination and action for a renewed left project that are still only beginning to ripen, at once shaking up and taking flight from the art system as we know it.

Yates McKee is an art historian and an activist with post-Occupy groups such as Strike Debt and Global Ultra Luxury Faction. His writing has appeared in October, the Nation and Artforum. He is Coeditor of the magazine Tidal and Sensible Politics: The Visual Cultures of Nongovernmental Activism.


Praise For Strike Art: Contemporary Art and the Post-Occupy Condition…

“This irrepressibly vibrant page-turner is the first art historical reading of Occupy Wall Street, and a canny account of politically engaged art before, during and after the events of 2011. I’m tempted to call it the sequel to Artificial Hells, but this would do a disservice to its enthusiastic approach to activism. No left melancholia here—just a powerful commitment to the liberatory horizon of both progressive art and politics.”
—Claire Bishop, author of Artificial Hells: Participatory Art and the Politics of Spectatorship

“Strike Art is, above all, a book of cultural documentation, one that relives the events and ‘ethical spectacle’ of a radical political moment that seems to be giving way, in the usual manner, to a pursuit of electoral success rather than wholesale reform. The art that McKee discusses is often transient by design, produced by collectives or anonymous bodies, and distributed freely or slyly entered into the circulation systems of the culture at large.”
—Mark Kingwell, Harper's

“A lucid and sure-footed guide to today’s renaissance of art radicalism. A participant as well as a critic, McKee knows exactly what he is talking about, and the result is red hot.”
—Andrew Ross, author of Creditocracy and the Case for Debt Refusal

“McKee’s elegant and illuminating book investigates the intersection of activism and contemporary art in a way that transforms our understanding of both.”
—Michael Hardt, coauthor of Empire

“Why in this era of neoliberalism and its diktat—Commodify Everything!—has art increasingly become a critique of commodification? Is this anomaly an expression of the peak of cynicism—with artists making money by criticizing it—or is this the prefiguration of a new connection between art and anti-capitalist revolution? If these questions concern you, then Yates Mckee’s Strike Art is a book you need to read.”
—George Caffentzis, author of In Letters of Blood and Fire

“In this lively and engaging book, Yates McKee turns the old concept of the Art Strike on its head. Strike Art asks its readers to move outside the art system and get ready for the artist as organizer. A must-read for activists, visual or otherwise, everywhere.”
—Nicholas Mirzoeff, author of How to See the World

“In this inspirational and engaging analysis, McKee positions art as more than mere protest graphics, rebellious puppetry, or subversive chanting: the energies of social, economic, and political transformation go right to the heart of Occupy’s world-changing creativity. Art in the post-Occupy condition—one that addresses climate justice activism as much as Black Lives Matter, Strike Debt as much as post-capitalist commoning practices—surpasses the containment of art institutions, daring to reinvent the very terms of life today.”
—T.J. Demos, author of The Migrant Image: The Art and Politics of Documentary During Global Crisis

“A profound and insightful book that asks us, using descriptions, history and theory, if there can ever be art without movement, or movement without art.”
—Marina Sitrin and Dario Azzellini, authors of They Can’t Represent Us!: Reinventing Democracy from Greece to Occupy

“McKee is at his best in creatively reading the symbols of Occupy Wall Street.”
—The National

“Strike Art is written by someone who was directly involved in the day-to-day organizing work of [Occupy Wall Street], and who continues to participate in the movement’s afterlife. McKee’s book is therefore replete with granular information about the ambitious, and sometimes ambiguous, revolt of the 99%, details that other commentators can only address in a second-hand manner. In this sense he aligns his writing with Walter Benjamin’s well-known directive that authors become producers with a ‘tendentious’ tilt towards working class struggles.”
—E-flux

“Because he is both committed to what he recounts but also nuanced in his criticisms, McKee’s book is one of the most coherent presentations of the new kinds of activist art that we have seen emerge since the development of social media and by and large after the emergence of the alterglobalization Left in the late 1990s.”
—Marx and Philosophy
or
Not Currently Available for Direct Purchase
Copyright © 2020 American Booksellers Association