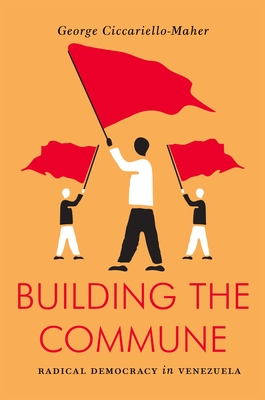 Since 2011, a wave of popular uprisings has swept the globe, taking shape in the Occupy movement, the Arab Spring, 15M in Spain, and the anti-austerity protests in Greece. The demands have been varied, but have expressed a consistent commitment to the ideals of radical democracy.

Similar experiments began appearing across Latin America twenty-five years ago, just as the left fell into decline in Europe. In Venezuela, poor barrio residents arose in a mass rebellion against neoliberalism, ushering in a government that institutionalized the communes already forming organically. In Building the Commune, George Ciccariello-Maher travels through these radical experiments, speaking to a broad range of community members, workers, students and government officials. Assessing the projects’ successes and failures, Building the Commune provides lessons and inspiration for the radical movements of today.

Praise For Building the Commune: Radical Democracy in Venezuela (Jacobin)…

“George Ciccariello-Maher reminds us of the extraordinary achievement of Venezuela’s communes in fostering direct democracy at the community and workplace scales. Whatever storms may come, they represent the highest level of popular self-organization in modern Latin American history.”
—Mike Davis, author of Planet of Slums

“Democracy has been emptied of its content, and Building the Commune offers an alternative model for political organization: the Commune, whose roots are in 1871 Paris but whose contemporary emergence is in Venezuela. A sharp and important book that puts at center-stage the ambitions of ordinary people to govern themselves.”
—Vijay Prashad, author of The Poorer Nations

“George Ciccariello-Maher’s careful engagement with the revolutionary creativity of the communes traces a trajectory of hope for Venezuela−and also for the rest of us looking for the forms of our emancipation. Attuned to the ways left and right exploit the streets and social media, Building the Commune is essential to the Left’s renewed discussion of the tactics and strategies for building collective power.”
—Jodi Dean, author of Crowds and Party and The Communist Horizon

“In the post-Chávez era in Venezuela, one under-reported institution stands out as the repository of popular aspirations: the Commune. George Ciccariello-Maher brilliantly describes their activities against the background of increasing political strife. Essential reading for all those anxious about the future of Venezuela.”
—Richard Gott, author of Hugo Chávez and the Bolivarian Revolution

“Behind the rampant debates on Hugo Chavez and Nicolas Maduro’s legacy, millions of men and women in Venezuela’s smallest towns and largest cities are building local communes. Ciccariello-Maher’s book is a triumph of reporting, narrative, and theoretical analysis. It’s a testament to what happens when you keep your eyes open, your ear to the ground, and your head on straight.”
—Corey Robin, author of The Reactionary Mind

George Ciccariello-Maher is Associate Professor of Politics and Global Studies at Drexel University in Philadelphia. He is the author of We Created Chávez: A People’s History of the Venezuelan Revolution and Decolonizing Dialectics.
Loading...
or
Not Currently Available for Direct Purchase