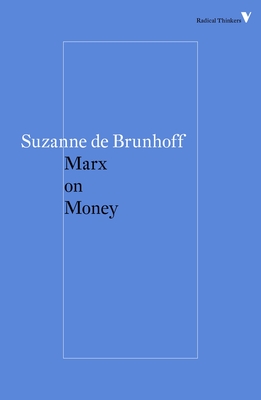 The republication of Suzanne de Brunhoff’s classic investigation into Karl Marx’s conception of “the money commodity” shines light on commodities and their fetishism. The investigation of money as the crystallization of value in its material sense is central to how we understand capitalism and how it can be abolished. Marx on Money is an elegant analysis of how money, credit, debt and value fit into the “logic of capital” that characterizes commodity society.

“While Marxist theory and radical economists in general emphasize the real aspects of economies, de Brunhoff has been a pioneer in this current of thought.”
—Michel Beaud and Gilles Dostaler in Economic Thought Since Keynes: A History and Dictionary of Major Economists

Suzanne De Brunhoff (1929–2015) was a French economist who wrote widely on monetary policy and Marx’s own views on the significance of money within capitalist society. She also published in English the book State, Capital and Economic Policy. She taught at the Université of Paris X Nanterre, was an active member of the French Communist Party, and participated in the struggle for Algerian independence.
or
Not Currently Available for Direct Purchase