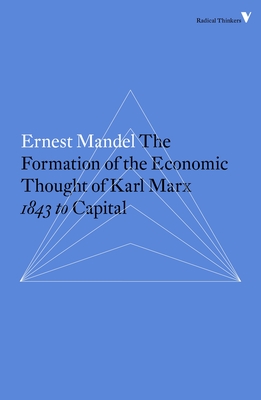 The Formation of the Economic Thought of Karl Marx

Ernest Mandel traces the development of Marx’s economic ideas from the Economic and Philosophical Manuscripts to the completion of the Grundrisse. In a series of crystalline chapters, he provides an overview of subjects central to Marxist economic theory. Mandel focuses on Marx’s concept of alienation, which gained much currency among Marxists in the twentieth century, and traces the development of debates surrounding the labour theory of value, and Marx’s writings on communism and “crisis.” These discussions remain pertinent today, and these texts vital to all those who wish to interpret and to change the world.

Praise For The Formation of the Economic Thought of Karl Marx: 1843 to Capital (Radical Thinkers)…

“One of the most creative and independent-minded revolutionary Marxists of the post-war world.”
—Guardian

“Late Capitalism is the answer to how Marx might view the complex economic phenomena of the 1970s. It is sophisticated, well written, impressively documented. This volume is, indeed, one of the major contributions of the last decade to Marxist economics.”
—Choice

“I’ve learned a lot over many years from reading Mandel, and I have a lot of respect for his memory.”
—Ken MacLeod

Ernest Mandel (1923–95), historian, economist and activist, was a leading figure inthe Fourth International from 1945 and was the author of a number of books, including Late Capitalism, Marxist Economic Theory, Long Waves of Capitalist Development, and The Meaning of the Second World War.
Loading...
or
Not Currently Available for Direct Purchase