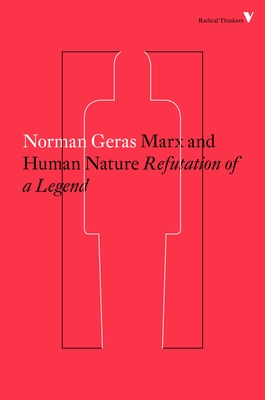 Refutation of a Legend (Radical Thinkers)

“Marx did not reject the idea of a human nature. He was right not to do so.”

That is the conclusion of this passionate and polemical new work by Norman Geras. In it, he places the sixth of Marx’s Theses on Feuerbach under rigorous scrutiny. He argues that this ambiguous statement—widely cited as evidence that Marx broke with all conceptions of human nature in 1845—must be read in the context of Marx’s work as a whole. His later writings are informed by an idea of a specifically human nature that fulfills both explanatory and normative functions.

The belief that Marx’s historical materialism entailed a denial of the conception of human nature is, Geras writes, “an old fixation, which the Althusserian influence in this matter has fed upon … Because this fixation still exists and is misguided, it is still necessary to challenge it.” One hundred years after Marx’s death, this timely essay—combining the strengths of analytical philosophy and classical Marxism—rediscovers a central part of his heritage.

Praise For Marx and Human Nature: Refutation of a Legend (Radical Thinkers)…

“This remarkable short book deserves to be widely read and not only by those interested in Marxology. For it achieves something rare in its field: rationally compelling proof. Not only does it conclusively refute a widely current legend about Marx’s thought ... it does so with striking elegance, economy, and argumentative power.”—Steven Lukes, Times Literary Supplement

Norman Geras is Professor of Government at the University of Manchester. His books include Solidarity in the Conversation of Humankind, Marx and Human Nature and The Legacy of Rosa Luxemburg.
Loading...
or
Not Currently Available for Direct Purchase