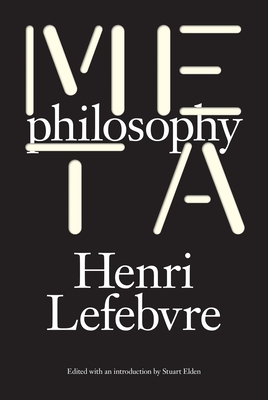 Leading French thinker with his key work on philosophical thought

In Metaphilosophy, Henri Lefebvre works through the implications of Marx’s revolutionary thought to consider philosophy’s engagement with the world. Lefebvre takes Marx’s notion of the “world becoming philosophical and philosophy becoming worldly” as a leitmotif, examining the relation between Hegelian–Marxist supersession and Nietzschean overcoming. Metaphilosophy is conceived of as a transformation of philosophy, developing it into a programme of radical worldwide change. The book demonstrates Lefebvre’s threefold debt to Hegel, Marx and Nietzsche, but it also brings a number of other figures into the conversation, including Sartre, Heidegger and Axelos. A key text in Lefebvre’s oeuvre, Metaphilosophy is also a milestone in contemporary thinking about philosophy’s relation to the world.

“Metaphilosophy establishes Lefebvre’s place among the twentieth century’s very greatest Marxist thinkers. Arguing that the idea of philosophy can only be realized by going beyond philosophy itself, Lefebvre opens philosophy up to the concerns of everyday life and love, mass media and synthetics, consumerism and nuclear apocalypse, in a breathtakingly original vision of what truly radical thought might be. First written in French half a century ago, the remarkable challenges that it poses remain as significant as ever. There will not be a more important work of philosophy published this decade.”
—David Cunningham, Institute for Modern and Contemporary Culture, University of Westminster

“A one-time Resistance fighter and member of the French Communist party, Lefebvre …argues that to be less fatalistic and more creative in confronting the world’s problems, philosophical thinking will need to be more poetic, as it was at its beginning … Recommended.”
—B.T. Hutchinson, Metropolitan State University of Denver

“One of the great French intellectual activists of the twentieth century.”
—David Harvey

“It is not excessive to claim that he is the ecophilosopher of the twenty-first century.”
—Stanley Aronowitz

Henri Lefebvre (1901–91), former resistance fighter and professor of sociology at Strasbourg and Nanterre, was a member of the French Communist Party from 1928 until his expulsion in 1957. He was the author of sixty books on philosophy, sociology, politics, architecture and urbanism.

Stuart Elden is Professor of Political Theory and Geography at University of Warwick. He has co-edited and/or co-translated three previous volumes of Lefebvre's work, and is author of books including The Birth of Territory (University of Chicago Press, 2013).
Loading...
or support indie stores by buying on
(This book is on backorder)